The grimly comic output of England's legendary Ealing Studios is revived, barely, in this homage to such funereal outings as The Lavender Hill Mob and The Ladykillers. The latter was remade recently by Yanks Joe and Ethan Coen, who managed rather successfully to import Ealing's predilection toward the black, lacy unmentionables that lurk, throbbing and barely contained, beneath even the most proper of human facades. While this is a theme artists, particularly those of a literary or cinematic bent, return to over and over again (Grace Metalious' "seething novel of unchecked passion," Peyton Place, and Alfred Hitchcock's Shadow of a Doubt are but two examples), the black-as-pitch humor of the Ealing films are shivery good fun, and their dark humor remains a particularly English phenomenon (there was only one Alec Guinness, ever). In Keeping Mum (with an original screenplay by American author Richard Russo), two-time Oscar winner Dame Maggie Smith plays Grace, who arrives in a tiny village in Cornwall to tend house for the befuddled local vicar, Walter Goodfellow (Atkinson, playing down his usual schtick), and his family, which includes wife Gloria (Thomas), who's having an affair with her American golf pro (Swayze, satirizing his Dirty Dancing days with mixed results), and their two offspring, teen slag Holly (Egerton-Dick) and bully-bedeviled Petey (Parkes). It'd all be too, too Mary Poppins were it not for the fact that the elderly Grace's previous employment was in an asylum for the criminally insane. In a prologue, we learn that the young Grace had murdered and dismembered her philandering husband and his mistress, and so when she arrives to care for the vicar's fractured family, the glint in her eye slices both ways, eventually skewing from dotty old dowager to clever loony. Like Poppins, however, this aging eccentric somehow manages to mend the broken brood. Smith is excellent as the potty Grace, with both Atkinson and Thomas equally fine in their roles. But the fact is plainly seen: The Ealing of yore is gone, and Guiness, ex-ladykiller, is now and forever, Obi-Wan Kenobi. Here's mud in your eye. 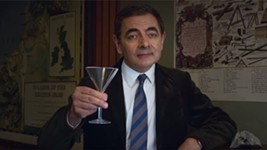 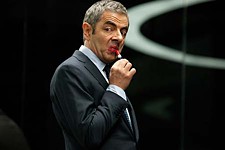