You’ve never seen a movie like this one. There is no other movie like this one – the only possible exception being Mitchell’s Hedwig and the Angry Inch – and though this sophomore effort is likewise partially musical, likewise partially animated, and likewise all kinds of queer, it’s more concerned with the private selves of its characters than it is with the grand drama of personae. If Hedwig Robinson put her wig back into the box, she might show up at Shortbus, a semisecret salon where curious New Yorkers experiment with soft drugs, performance art, and love anarchy in a relaxed and supportive environment. Stage left, enter Sofia (Lee), who’s one of those fancy urban couples therapists who can’t take her own medicine and has never had an orgasm. Stage right, enter James and Jamie (Dawson and DeBoy), a long-term couple considering opening up their relationship. Ceth (Brannan) – pronounced “Seth” – is the boi who’ll come between them. And then there’s Severin (Beamish), a professional domme, and Rob (Barker), the voyeur across the way. Cabaret performer Justin Bond presides as himself, and JD Samson and Bitch hold court in the women-positive circle discussion room, which of course accommodates the entire spectrum from butch to femme. John Bair’s interstitial scenes of three-dimensional animation, which turn New York into a twinkling dollhouse cityscape, give the film its locations and structure, but the rest is largely improvised, with the characters devised in workshops between Mitchell and his cast. The movie is never less than audacious, which is good; after the initial shock of its graphic and truly all-encompassing concept of sexuality settles in – we begin, for example, with a montage including auto-fellatio, and later someone travesties “The Star-Spangled Banner” in ways best left undescribed – it’s possible to watch and appreciate the trust Mitchell seems to have earned from his actors. (As the film’s frustrated hetero woman, Lee’s quest for an orgasm isn’t the stuff of comedy, à la The OH in Ohio, but a more debilitating obsession, except during a dreadful, tonally awkward slapstick sequence involving a remote-controlled vibrating egg.) The strength of the film is its cheerful, matter-of-fact insistence that people have a right to be sexually happy, whether they’re old queens or young butches or married or single or fat or weird or different. The quest for sexual happiness is a radical notion in these repressive times, as well as a legitimate basis for storytelling, but Shortbus doesn’t quite delve as deeply as it ought into its characters’ emotions: It has more breadth than depth, perhaps due to its improvisational methods, and the over-the-top ending (complete with brass band) feels less than satisfying. 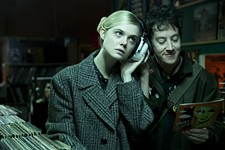 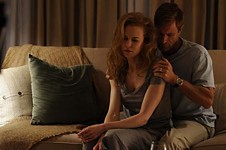