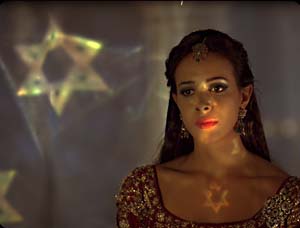 One Night With the King

Despite a title that makes it sound like a tell-all about a one-night stand with Elvis Presley, this movie is actually about the Jewish heroine, Queen Esther (Dupont), who saves her people from extermination through her marriage to the powerful King Xerxes of Persia (Goss). Originally named Hadassah, the orphaned girl adopts the name Esther to hide her Jewish identity when she is one of the many beautiful young women who are siphoned off to the palace as candidates to become the new queen after Xerxes banishes his prior wife for disobeying him. But Xerxes is handsome, and the top eunuch Hagai (Lister) takes a liking to her, so before long the peasant girl has become the first lady of the land. The film has the lavish look of a proper Biblical epic, although the screenplay is based on the novel The Hadassah Covenant by Tommy Tenney and Mark Andrew Olsen. For a change, it's nice to see a religious film in wide release that has nothing to do with Jesus Christ, the New Testament, Christian proselytizing, or the apocalypse. It brings back memories of all the young girls in Hebrew school who angled for the role of the beautiful Queen Esther in the annual Purim pageant. The production qualities in this film rendition are definitely better than anything produced in my Hebrew school, even though the audience I saw it with seemed to know nothing about the Jewish custom of the stomping of feet and spinning of graggers every time the evil Hamen's name is spoken. The performances are all solid, although the screenplay frequently bogs down with the complexity of palace intrigues and plots that could have been rendered more consumer-friendly. Despite the possibilities of the first reteaming, Sharif and O'Toole since Lawrence of Arabia, the two men are never onscreen together, and O'Toole appears in only one opening scene despite his prominent billing. Now if only they would sell fresh Hamantaschen at the concession stands. The Ultimate Gift
In this inspirational film, a deceased tycoon's will decrees that his grandson perform a series of tasks to determine if the young man is worthy of inheriting the fortune.