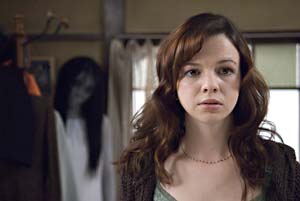 Japanese director Shimizu may be the only director in history to have helmed a pair of Hollywood remakes of his two biggest hit films and managed to screw up both of them, proving once and for all my theory that big-budget, studio-commissioned remakes of contemporary Japanese horror films lose something in the cultural translation and end up, you know, sucking ass. Like my thesis, the current crop of J-horror films is about as subtle as a pickax, full of mewling ghost children and what must be miles of straight, black hair entangling the unlucky and, in the case of Shimizu's auto-remakes, the baka gaijin, or round-eyed foreign devils. What made Shimizu's 2003 Japanese film Ju-on: The Grudge – which, come to think of it, was already a sequel to two previous Grudge films – was its unnerving lack of exposition and an extraordinary attention to the tiny details of atmosphere too frequently overlooked by Shimizu's Hollywood counterparts. (Available on DVD, Ju-On: The Grudge features some of the most genuinely disturbing sound effects and imagery ever caught on film; I watched it again the other day, and I'm delighted to say it still creeped me the hell out.) That said, this second remake – a third is on the way – is a disaster, sporting some of the most inexplicable acting, courtesy of Chen and Tamblyn, that the series has yet produced. As Aubrey, the sister of the previous film's cursed-house victim (ill-played by Gellar), Tamblyn travels to Tokyo to find out what drove her sibling to madness and death and ends up running afoul of the exact same horrors: Fuji's scary, starey bad-hair-day-from-hell and her eternal partner in ookiness, the blue-skinned ghost-boy who meows like a cat. I'm assuming the kanji for those two particular characters is somewhat more compelling, but the descriptions are apt, and, as The Grudge 2, slowly progresses in tone from somber to somnambulent, the viewer is apt to fall asleep waiting for the next strand of black hair to come crawling out of his popcorn. Things happen for no apparent reason (Jennifer Beals!), and while that may have added to the original Japanese version's aura of fractured reality, here it only serves to point out the ludicrousness of the story. Americans are befuddled by the inexplicable, and they demand explanations. With The Grudge 2 Shimizu delivers them and thus defangs the horror, leaving us in a well-lit room, pining for the shadows. 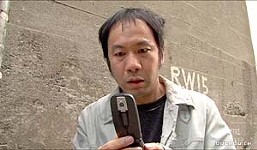