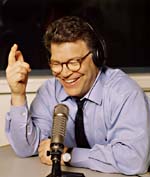 For a film that tackles the loaded subject of the birth and subsequent woes of Lefty radio semistaple Air America – as well as the 2004 presidential election and the bitter, media-savvy battlegrounds that preceded it – this documentary from Doob and Hegedus is puzzling in its dearth of lasting meaning. It manages to follow around comedian and politico Al Franken in the months following the dispiriting death in a plane crash of Sen. Paul Wellstone, D.-Minn., all the way through to the re-election of George W. Bush without managing to either inflame or inspire the viewer or add much new information to anything other than Franken's already well-documented history. Ranging from Saturday Night Live clips of his canny, self-help naif Stuart Smalley tending to an emotionally bruised Al Gore to footage of run-ins with the likes of Fox News pundits Sean Hannity, Anne Coulter, and the ever incendiary Bill O'Reilly. The latter, while clearly working his own agenda, gets a lot of mileage out of the word "vile" when referring to Franken, as he did with increasing frequency in the wake of publication of the comic's exposé on the right's media tactics, Lies and the Lying Liars Who Tell Them: A Fair and Balanced Look at the Right. The back-and-forth between culture-warring ideologies is occasionally entertaining, but more often than not it's just depressing. It's even more so when taken in the context of everything that has come since, with a political polarization that seems to have morphed into the dominant, single-spectrum, fully partisan political spectrum. Franken, to his credit, is well-armed with knowledge and the cold hard facts to back up his arguments (amounting, essentially, to the "right lies," which is hardly a revelation these days). One notable sequence shows him squaring off and running circles around former film critic Michael Medved, while another, toward the end of the picture, has Franken eating dinner with Walter Mondale, who offers him shrewd advice on a proposed senatorial bid. But nothing ever comes of it (at least not here), and the film ends, more or less, abruptly with the Bush White House win. Neither as adroitly funny as Franken's comic routines, nor as notable as his conversion to the fine art of politics, this is a 90-minute "What If?" with no discernible answer. 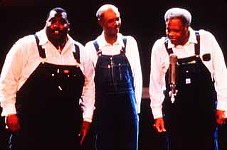 Down From the Mountain
Bluegrass fans should have few complaints about this stellar concert film, which unites the musical talent from O Brother, Where Art Thou? in a group ...