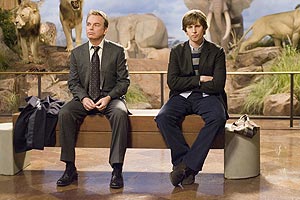 While it’s not uncommon for Hollywood to completely defy the laws of probability, sometimes the absurdity of a misfire is so poignant as to demand attention. Case in point: School for Scoundrels, a modern remake of a 1960 British satire. A film jam-packed with multitalented comedians (Cross, Silverman, Sanz, Stiller) would seem a slam-dunk opportunity for big laughs. I don’t know how they managed it, but School for Scoundrels is not only unfunny, it’s completely forgettable. Heder (Napoleon Dynamite) plays a shy and insecure meter maid named Roger. His career is essentially a one-note gag, resulting in a mild chuckle as he chugs along in his meter-mobile at 5 mph. But the chuckle quickly turns into a sigh when you realize there aren’t any good jokes coming any time soon. While Roger painfully pines for his fresh-faced neighbor, Amanda (Barrett), he lives a shadow of a life: mocked at work and incapable of keeping even his volunteer position as a Big Brother. Roger is clearly in need of a fix. Enter Thornton (Dr. P) and his extremist class for losers. Now, we’ve seen Billy Bob pull off some great performances and his turn in Bad Santa is inspired comedy. But in this sleepwalking turn, he clearly has no idea why he’s in this movie and is as eager to get through the experience as the audience will be. Roger enrolls in Dr. P’s supersecret confidence building class, which consists mostly of being yelled at by Thornton or harassed by his second-in-command (Duncan). Some of the supporting players provide a smile as the other class members in search of their "inner lion." But when the story escalates to a Roger vs. Dr. P battle for Amanda, the character development has been so minimal and the jokes so disappointing, it’s hard to muster an emotion or a laugh. Though Heder is mildly endearing, he should look into finding a new agent right quick. And before he’s asked to sign on for The Benchwarmers 2. Co-writer/director Phillips, who thrives in testosterone-fueled comedy (Old School, Road Trip), seems at a loss this go-around. While his previous films propelled themselves with whimsy and Will Ferrell, School for Scoundrels varies between taking itself seriously and not, leaving the viewer alternately confused and disappointed.