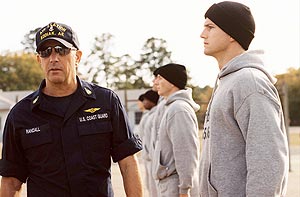 What by all rights should have been a typically empty Hollywood action movie about the explosive, adventurous lives of Coast Guard Rescue Swimmers, The Guardian turns out instead to be a surprisingly engaging character-driven picture: not quite Ingmar Bergman, of course, but not Michael Bay either. The film’s two heroes, Coast Guard legend Ben Randall (Costner) and his young hotshot protégé Jake Fischer (Kutcher), are both gifted but damaged, the best in the business at saving lives but haunted by memories of dead friends and past failures, and with just the slightest prodding their neuroses and insecurities come spilling out all over the floor. In some ways, this film is a small triumph for both of the film’s stars. Costner, for one, has rarely been this good in recent years. He may not be Richard Burton, but he does an admirable job of shedding light on the conflicted soul of a hero who’s sacrificed his own life to save others’, and he treads ably enough through the movie minefield of ruined marriages and drunken nights to light on something new and resonant. Kutcher, usually inhuman behind a mask of puerile clowning, manages occasionally to convince us of the pain and loneliness bubbling just below Fischer’s veneer of callow arrogance. This believability comes and goes, and Kutcher’s still got a lot of work to do before he can take his seat at the adult’s table, but he might be on to something here – provided he’s willing to forgo his need to be adored by 12-year-old girls. The Guardian occasionally gets lost in timeworn tropes about the ennobling power of selflessness, but director Davis (The Fugitive, Holes) and writer Ron L. Brinkerhoff also manage to poke a few holes in the hero myth to show how psychologically damaging and alienating a life spent rescuing others can be. (Randall, for example, can’t remember the number of lives he’s saved, but he’s haunted by each one he’s lost.) That being said, The Guardian makes no bones about being a tribute to the Coast Guard, and in its weaker moments, the movie veers dangerously close to promotional-video territory, like an extended TV commercial listing off the advantages of enlistment. But to Davis’ credit, whenever his film starts to drown in flag-waving and hagiography, he turns his camera back toward Randall and Fischer and lets them stumble their way down slightly darker hallways. 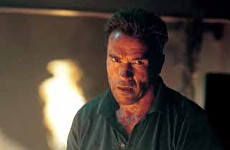