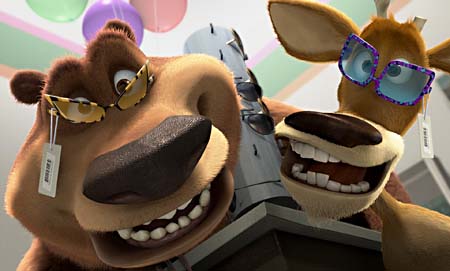 Sometime over the last 15 years, an animated-blockbuster formula was carved onto stone tablets by Disney and brought down from the Verdugo Mountains above Burbank to the studios below. The formula was easy to follow and seemed to guarantee a profit, so, save for a few exceptions, the studios and filmmakers followed it faithfully. Take an odd coupling of bumbling animals – the tablets decreed, one large and fussy, the other small and volatile – send them out on an adventure together with little but the charm of their celebrity voices to protect them, pit them against an antagonist of frothing hostility (not evil, mind you, like in the classic Disney films of the Forties and Fifties or modern-day Japanese anime movies – just low-grade comic petulance), and stand back as bumper-sticker lessons about friendship and loyalty crowd the screen. Open Season follows this formula to the letter; for directors Allers, Culton, and Stacchi, there’s obviously safety in box-office numbers. Open Season’s tale of a domesticated grizzly bear, Boog (Lawrence); his sidekick, Elliot (an antic mule deer voiced by Kutcher); and their quest to find their way back home after being deposited deep in the woods – fighting off a delusional hunter and becoming best friends as they go – is long on manic energy and bathroom humor but short on real storytelling, emotion, or characters. I realize we’re talking about a children’s movie here, and the squealing hordes of 5-year-olds at the screening I went to seemed to like Open Season just fine, but even kids deserve movies that strive to be inventive and surprising, rather than just lazy, clichéd, prepackaged nonsense. They’re our future, after all. Me, I don’t worry about a generation of kids who’ve been reared on a steady diet of cinematic violence and sex; I worry about a generation of kids who grow up watching movies that mistake clamor for originality, irony for imagination, and pop-culture references for storytelling. I worry about a generation of kids who think Ashton Kutcher is funny. The thought makes my blood run cold. The directors of Open Season had hands in creating classics like The Lion King, Monsters, Inc., and Toy Story, and they do an admirable job of making their movie sparkle and shine with CGI glitter. But despite this pedigree and craftsmanship, Open Season is little more than paint-by-numbers filmmaking, and it fails in the most important charge of any children’s movie: to transport its young and impressionable audience to a world where anything is possible, rather than to one where everything’s been thought of already. 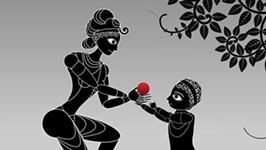 The Lion King 3D
Disney has retrofitted its 1994 hit in 3-D for a limited theatrical run.