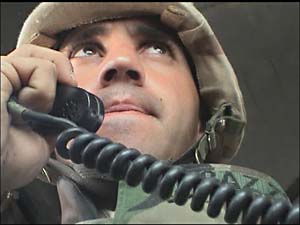 "Whoever said being a soldier was all about the blood and glory obviously forgot about the shit." These words, spoken by Sgt. Zack Bazzi as he zooms his mini DV camera toward a septic-waste truck north of Baghdad, take on multiple meanings throughout first-time director Scranton's chilling and riveting documentary. Bazzi, a Lebanese-born American soldier is one of three U.S. National Guardsmen who are both the focus of and the lens through which the film examines U.S. soldiers in Iraq. In February 2004, veteran journalist Scranton was invited to be an embedded reporter with the New Hampshire National Guard when they deployed to Camp Anaconda, one of the largest and most attacked U.S. bases in Iraq. Inspired instead to be "virtually embedded," Scranton recruited 10 soldiers to take video cameras and document their experiences. Remaining in constant contact with her cameramen through instant messaging and e-mail (indeed she credits the Internet as an "unseen collaborator"), Scranton reviewed the footage and directed the men from her home in New Hampshire over the course of their yearlong deployment. Narrowing down the focus to three men, Scranton (along with producer/editor and Hoop Dreams director Steve James) carved a 97-minute film out of more than 1,000 hours of footage. Sgt. Pink, Sgt. Bazzi, and Spc. Moriarty contribute disturbing, endearing, and insightful commentary on one of the most controversial wars in U.S. history. After returning home, Pink reflects on the one confiscated tape: footage of dead Iraqis over which the soldier's commentary expresses no regret. "If we're trained to shoot our weapons and kill these guys, how do you expect us to talk? What do you want me to say? 'Oh, jeez, I'm sorry' … I don't know." As raw and disturbing as it is wry and satirical, the resulting portrait is a powerfully unique film that goes beyond commenting on Operation Iraqi Freedom to become a provocative meditation on war itself.

A note to readers: Bold and uncensored, The Austin Chronicle has been Austin’s independent news source for almost 40 years, expressing the community’s political and environmental concerns and supporti