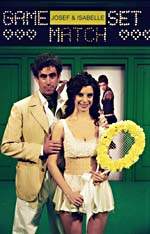 Even if it's not quite an affair to remember all year, this BBC Films mockumentary about three wacky weddings is pleasant and enjoyably diverting, thanks to some heavy lifting by its ensemble cast of British thesps better known across the pond. Confetti magazine's two editors (Montagu and comedian Carr) launch their annual "Bride of the Year" contest with a twist: They're looking for the most "original" nuptials, not the classiest. Enter the contestants: snobby Josef and Isabelle (Mangan and MacNeill), a tennis champion and his trophy girl; hippie naturists Michael and Joanna (Webb and Colman), who want to wed in the buff; and Matt and Sam (Freeman and Stevenson, of Shaun of the Dead), who plan to exchange vows in a classic Hollywood musical number. Of course there are complications – Isabelle's "extraordinary nostrils" require surgery, Sam's got a meddling mother (Mike Leigh regular Alison Steadman), and Joanna isn't sure she wants to drop trou after all. Can the gang's event planners (Watkins and Franklin) save the big day? The satire is pretty tepid, considering that its object is bridal-industry excess; director Isitt aims for a gentler, relationship-oriented farce instead. According to the film's press kit, the cast developed their roles in pre-production workshops – a technique borrowed from kitchen-sink realists like Leigh – and improvised their dialogue. The cast shines (just watch Marc Wootton of TV's High Spirits with Shirley Ghostman steal the whole movie as Matt's bitter best friend, pub rocker Snoopy) but without a stronger directorial hand, the film veers toward sheer silliness at times, losing the sweetness that defines its strongest moments. 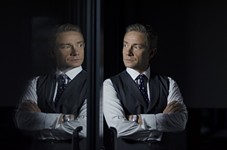