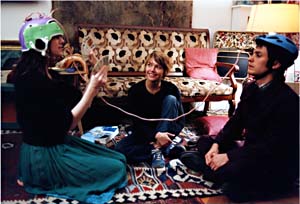 The Science of Sleep

Less a traditional narrative film than an often random-seeming collection of emotions – love and desire, in particular – retrofitted for the cinema screen, The Science of Sleep is likely to cleave viewers' reactions right down the center, with gushing, fulsome praise on one side and the Grinches with no sense of whimsy on the other. As for me, I think it's a mess, but – and this is a major caveat – an endearing, beautiful, hopelessly honest mess that's supported by a pair of performances so unnaturally natural that they draw you in and clutch you, struggling, to their flipping, flopping hearts. It's unlikely that anyone's going to think of Gondry as a traditionalist, but even his loyal stateside fan base, which grew by orders of magnitude on the success of his two previous films, Eternal Sunshine of the Spotless Mind and Dave Chappelle's Block Party, may find themselves growing restless if not downright annoyed by what is essentially Gondry's untrammeled romantic imagination. Like his compatriot Jean-Pierre Jeunet, Gondry is in love with love and aches to perfect its possibilities on the screen. That's a monumental task for any filmmaker, experimental or otherwise, but I bring it up because it's such a profoundly quixotic endeavor, made all the more noble for its seeming impossibility. Gondry isn't content with the theatrical nuances of l'amour fou – he wants to immerse his characters (and by extension, the audience) in the real thing, or as close to real as possible. In The Science of Sleep he does this by reverting to a playful, childlike dream state, in which a lonely, bored everyman named Stephane (Bernal) falls for his new neighbor, Stephanie (Gainsbourg), who at first resists his attentions. Stephane is so shy – perhaps unavoidably: He's an artist, lugging around a portfolio of childlike sketches of burning airliners and assorted global horrifics – that he has to approach this obscurantist object of his affections from his dreams, during which we are treated to a delightfully silly and all-too-accurate measure of what the lovelorn heart does while the more pragmatic mind is otherwise occupied. Gondry employs cardboard sets and construction-paper cityscapes, stuffed animals that gallop across the floor, and all sorts of blink-and-you'll-miss-it trickery in his attempt to replicate the spiraling feeling of falling into a new love. At times, it's unclear if what we are witnessing is reality or one of Stephane's (or even some other character's) nighttime interludes, which makes for a truly trippy moviegoing experience. It's messy, confusing, painful, and ultimately, thanks in no small measure to the unfettered talents of Bernal and Gainsbourg (who does her father, Serge, proud), utterly rewarding. And if that's not love, what is?