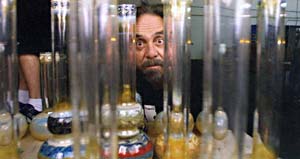 We're short on space this week, so I'll pass on a stoner colleague's two-sentence assessment post-South by Southwest: "It's not a great doc. But it's Tommy Chong." The movie itself gets a little muzzy at times – journalist Eric Schlosser, interviewed for the movie, is filmed from a strange angle with an off-ramp prominently placed in the shot, his voice muffled by traffic – but self-described "doper comedian" Chong cuts a hugely sympathetic figure in the story of his legal troubles after Operation Pipe Dreams, a massive anti-paraphernalia sweep led by John Ashcroft lieutenant and U.S. Attorney Mary Beth Buchanan. The tale begins on September 11, 2001, when United Airlines Flight 93 hit Somerset County, Pa. – Buchanan's jurisdiction. Schlosser and various commentators (Jay Leno, Bill Maher, legendary stoner Peter Coyote) argue that Chong was a fish in Buchanan's barrel; she'd been handed a "show trial" to prosecute, enforcing a Pennsylvania law criminalizing pot-smoking paraphernalia by hitting the world's most prominent pot-smoking target. Agents set up Chong's family bong-making business for a sting from Beaver Hills, Pa., leading to a front-page bust and nine months in prison for the mellow, grandfatherly guy who insists he's really just a comedian doing a bit from his buddy act with Richard "Cheech" Marin – not "glamorizing" pot use (as Buchanan argued in Chong's case) but satirizing it. But the joke's on the Bush administration when Chong comes out smelling like a rose, reborn as a civil-liberties activist. The film is authorized by the family (daughter Precious Chong is listed as a producer), and in the name of familiarity, its aesthetics are too casual, too home-movie in parts. Just the same, it makes its point. As Leno says in the film, "If they want to get you, they get you."