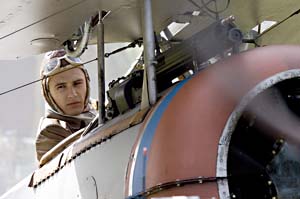 It's been ages since we've had a rousing aerial combat movie in theatres (two wars, actually), the last being 1990's Memphis Belle, courtesy of Michael Caton-Jones. In the interim, computer-generated digital effects have arrived in full, which means, on the face of it, it's that much easier to get all those nifty dogfights on film without risking too many stuntmen or relying on miniatures that don't quite nail it. On the fact of it, that is. Flyboys, which purports to chronicle the heroics of the Lafayette Escadrille, a subset of the French Air Service in World War I comprised of non-native Francophiles who really, really wanted to fly – even while describing loop-de-loops 5,000 feet over the French countryside as the Red Baron and his ilk spit hot leaden death your way. Franco plays airman Blaine, who gets the girl (Decker) and generally saves the day. Virtually all of the other members of the cast are the sort of stalwart, rough ’n' ready, general-issue military archetypes (the sullen black guy, the foppish swell, the uncomprehending fellow sporting an invisible crosshair atop his noggin) who seem to come pre-assembled from historical, derring-do scripts and Revell Model Kits. But then, the cast isn't the real draw here; the planes – and the resultant close-quarter, high-flying carnage – are. With that in mind, Flyboys isn't half bad, giving Howard Hughes a run for the fortune that bankrolled his 1930 epic Hell's Angels. Technical discrepancies abound, unsurprisingly rendering most, if not all, of the German planes crimson. While director Bill nails the sheer spectacle of squads of SPADs dovetailing in flames into the wide blue yonder, the earthbound action (much as it was in another sputtering epic, Michael Bay's Pearl Harbor) is strictly laissez-faire. Fans of zeppelins – and who isn't? – will savor the outrageously overdone climactic sequence, but anyone looking for a cross of iron (or even a buckled copper shell casing) might want to stop watching the skies. 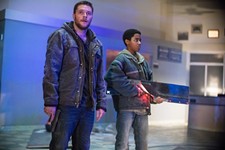