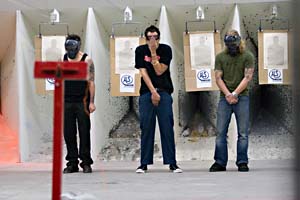 If you had thoughts of celebrating the arrival of autumn by attaching a leech to your eyeball or detonating a landmine near your person – just to see what would happen – the guys from Jackass want to save you the trouble. In their new film, a sequel to 2002 sleeper Jackass: The Movie, Knoxville, Margera, Steve-O, and their band of thrill-seeking merry men continue their quest to create entertainment out of self-immolation and to conquer lingering human fear by laughing, and occasionally vomiting, in its face. The troupe enters the film on a perfectly pitched note of comedy and daredevilry: running in slow motion out of a dense fog – to the heroic strains of Ennio Morricone, no less – trailing a herd of angry bulls as they go. And this is one of the film's saner moments. You may know someone who ran with the bulls in Pamplona, but I imagine you'd be hard-pressed to find anyone who's contemplated putting a fishhook through his cheek and diving into the ocean to pass himself off as shark bait. Jackass: Number Two is essentially a collection of absurdist, socially transgressive living-art pieces, and, taken together, they strike right at the heart of what moviegoing should be about: shared experience – of fear, humor, dread, disgust, pity, wonder – and the often unbearable thrill and agony of collective anticipation. I've never been in a theatre where the audience's reaction to what they were seeing onscreen was so unanimous and so unfiltered. Sure, the movie is long, at an hour and a half, but that's just quibbling. Strange as it might be to say, Jackass: Number Two is just the kind of vicarious excitement for which the movies were invented. 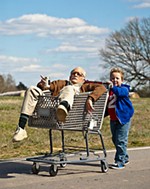 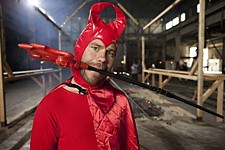