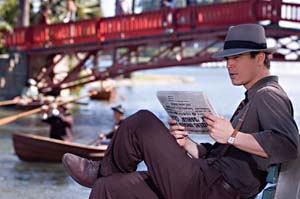 What does it say about me that I have a copy of the death certificate of Elizabeth Short hanging on my wall (right next to my signed 8x10 of KABC-TV night owl Vampira)? Probably not as much as the fact that I dropped a C-note on the frame for this two-bit photocopy which you, too, can own, courtesy of the County of Los Angeles City Morgue Gift Shop. American pop culture devours its own, somehow leaving the hopeless immortal and the mortals, too often, hopeless. But that's the way we like it, and so Ms. Short is better known these days as the Black Dahlia, tough-guy steno for the LAPD's most infamous unsolved murder case. Encapsulating Short's life in a book or a movie, such as James Ellroy's former, which begat Brian De Palma's latter, is chewy enough. Suffice to say, Elizabeth Short wanted fame and ended up with infamy. The real questions is, if she'd known the outcome, would she still have reached for that horrible brass ring? Ellroy, one of the finest crime novelists of the post-World War II era, is a pop-culture junkie with a particular jones for the dingier dives of the Los Angeles basin. His 1987 book serves as the basis for De Palma's film, and after a corker of a re-creation of the L.A. Zoot Suit riots, the movie goes into a psycho-noir tailspin and never recovers. Working from Josh Friedman's adaptation of Ellroy's book, De Palma gets the atmosphere right and even some of Ellroy's jazzy, back-and-forth retro-patter. Yet instead of slicing Ellroy's meaty novelization down to size, De Palma crams almost the whole thing into his film, which makes for lots of snappy repartée but very little sense. There hasn't been a studio-produced American noir as gorgeous as this that has made as little sense as this since Howard Hawks' splendid muddlement of Raymond Chandler's The Big Sleep. It's difficult enough to ask audiences to fall for the square-jawed, but still too pretty by half, Hartnett as a stone-cold LAPD mug (outside of Sin City, that is; Alan Ladd, he isn't) without tossing in McGowan (in a Nefertiti getup, no less) and Swank, as a daddy's-little-Dahlia, to boot. Forty-five minutes in, I was already glancing at my watch and wondering why the only lively actress in this film was playing the dead girl. Go figure. 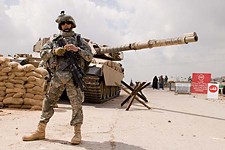