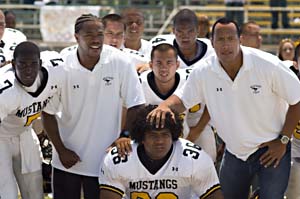 I've seen a lot of troubled, urban youth learn teamwork, fair play, and self-respect from a hardass sports coach. The coach uses unconventional methods and stands alone against a bureaucratic status quo. Would-be players will quit the hard work, then glower from the sidelines while the rest of the team faces rich, smug opponents from the right side of town. (Think: Coach Carter or even Akeelah and the Bee.) On the page, there's nothing special about this football yarn, based on an eponymous television documentary filmed inside California juvenile detention center Camp Kilpatrick, so audiences can be excused for underestimating it; nor does the pairing of a wrestler and a rapper with Joanou (Final Analysis) at the helm necessarily inspire confidence. Yet the film is a pleasant surprise – a swift, sure-footed, and gritty melodrama that plays to the strengths of its formula and elicits empathy for its kids. A probation officer (Johnson) starts a football team in hopes of lowering the camp's rate of recidivism, grimly training them to take on the snot-nosed pricks of a Christian youth sports league. There's some comic relief (Brandon Smith as the team's tiny, loudmouthed waterboy), but mostly the movie barrels toward you, stiff-armed. Joanou mounts the game sequences with gladiatorial grandeur – granular, slightly accelerated handheld footage slashed together in montage – and every sack echoes with a sickening crunch. These kids aren't contestants but combatants, the field of play a crucible of race and class war. A stunning action set-piece of street violence early in the film likewise unspools at a breakneck pace with the savage, horrible beauty of a Peckinpah shoot-out. Some reviewers have chastened the filmmakers for glamorizing thug life, but the complaint is misguided; its juiced-up style reflects the teenage adrenaline and hair-trigger fury of young men raised fatherless in poverty. The PG-13 rating, however, is too low. As for the Rock? Well, he's the Rock, yelling as if from outside the ropes of World Wrestling Entertainment, but sensibly enough cast as a guy yelling from outside the sidelines. 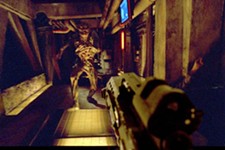 Doom
Doom is not so much a film as a marketing tie-in, albeit one with some exceptional production values.