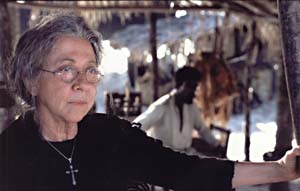 The House of Sand

In 1910, the Brazilian state of Maranhào looks like the surface of the moon: dry, lifeless dunes pocked with craters, stretching on all sides into infinity except along one edge, an impassable coastline leading to open water. Its landscape of sand shifts continuously, rippling like live skin. Nobody lives here unless they're desperate, such as Massu (Jorge), the grandson of escaped slaves. Enter Áurea (Torres), the handsome and feisty young wife of a crazed settler (Guerra), and her taciturn mother, Dona Maria (Montenegro). One or two sudden reversals of fortune later, Áurea and Maria are alone in the dunes – abandoned by their party with only the titular half-finished dwelling as defense against the elements. The House of Sand is a quintessentially moderate art film – not as philosophical or formally experimental as Woman in the Dunes, but panoramic and symbolic, epic in scope, technically accomplished, and miraculously acted by the mother-daughter team of Montenegro (Central Station) and Torres in showy dual roles. (Technically, Montenegro's is a triple role.) The story isn't dry, either; it's a juicy, sand-swept, pastoral melodrama about the passions of three generations of women, with feral love children skipping through the dunes in diaphanous nightgowns and geodesic markers and missed connections and promises to return, and nobody does sexy like the still-emergent national cinema of Brazil. The House of Sand is a more transparently ambitious, prestigious "woman's picture" than Waddington's previous feature, 2000's Me You Them, a warm and offbeat film which treated bombshell Regina Casé's many loves in the countryside as light farce. It's a more artfully realized and thoughtful story about the heart and its wants than any Hollywood has managed in many moons, but the film is still a bit too stolid to be great, despite taking home the Alfred P. Sloan Feature Film Prize from Sundance. 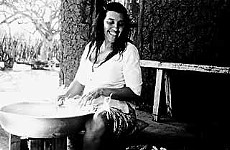