The bile-enfused gag at the hungover heart of Barfly, Barbet Schroeder's 1987 adaptation of alchoho-lit icon Charles Bukowski's work, arrived with Henry Chinaski's (Mickey Rourke) self-sodden bar-stool rallying cry, "To all my friends!" What friends? The sozzled Chinaski is back, this time played by Matt Dillon in a low-key, gorgeously beery performance that cuts closer to the author's literary state of permanent un-grace than any before; it's 100-proof Bukowski, but with a decent barkeep at the helm, purer of spirit, and with less blood on the stool. Hamer, working from a lean, mean, and mystifyingly entertaining script co-written by frequent Jim Jarmusch producer Jim Stark, renders the drinking life not as an option but as a necessity. As the title suggests, it's gainful employment that is the questionable facet. In the opening sequence Chinaski's working at one of history's most primal blue-collar jobs: smashing up mammoth blocks of ice into more manageable shards to later be delivered to the bar-back coolers of assorted watering holes. Called by his foreman to replace a missing deliveryman, Chinaski makes it to the bar in question and dutifully totes his bag of rocks inside, but never makes it out. What this working stiff needs is a good, stiff drink, and when his boss finally tracks him down (the refrigerated delivery van, back door swung wide open with its payload sloshing down the gutter, is a dead giveaway), it's back to the unemployment line. Noble savagery of this sort could get awfully dull without something – anything – to hang it from, and Chinaski, the drinker, is at his core Chinaski, the aspring writer. Blotto or no, he sits in whatever fleabag, skid-row, cold-water flat he finds himself in and writes, in longhand, mailing off his soul to the Great and Sober Unknown in manila envelopes as rigid and humorless as the straight world outside his liver. And so it goes. Until Chinaski shacks up with the equally soused Jan (Taylor, sultry, squalid: squaltry?), who matches him drink for drink and grunting orgasm for orgasm. Taylor is perfectly suited to the role; never exactly pretty in a mainstream way, the actress has always come off as having wandered in from Greenwich Village circa 1960 (I like to think that in some alternate universe she's married to Jack Kerouac or working in Mel Welles' little shop of foget-me-nots). She has a jazzy, snazzy, snooker-whore vibe, and I mean that in a very, very good way. Her Jan is even more of a lost soul than Chinaski, but in the end neither one really needs the other, and they know it. Factotum, for all its grim grind, is funny-serious, and smart-stupid. Just like you after four beers, and me after eight. 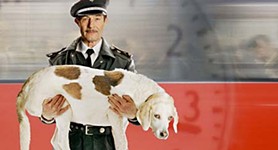 O'Horten
This strange little Danish gem tells the story of the aptly named Odd Horten, a man cut from his moorings when he's forced to take retirement at age 67. Kitchen Stories
The science of efficiency is undone by the unpredictability of human emotion in this Swedish comedy.