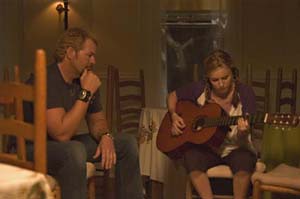 Looking back, it was probably unreasonable to expect much in the way of subtlety from a Toby Keith movie. After all, Keith is the gravelly voiced, trucker-cap-wearing, multiplatinum-selling country singer who released an album called Shock'n Y'all only eight months after the first bombs started falling on Baghdad and whose response to the September 11 tragedy was to personally threaten Osama bin Laden on record. Now, he's bringing that same thoughtful tough-guy American stoicism to Hollywood, courtesy of Country Music Television films, and the result is a sentimental mess. In Broken Bridges, Keith digs deep to play Bo Price, a gravelly voiced, trucker-cap-wearing, multiplatinum-selling country singer who returns to his small hometown in Tennessee after a military transport full of local soldiers crashes during an exercise, killing all aboard, including his younger brother. Meanwhile, Angela Delton (Preston), Bo's jilted and bitter ex-high school sweetheart, is on her way home to that same Tennessee town, having years before cast aside small-town Southern simplicity for the high-profile yet emotionally bankrupt life of a big-city newscaster. From this maudlin setup, Broken Bridges follows the absolute straightest and most predictable line – from estrangement to atonement and on to redemption – leaving no cliché untouched. For Price, an undependable drunk on the self-destructive downswing of a once-promising music career, that redemption comes in the form of Dixie Leigh (pop singer Haun), his 16-year-old daughter with Angela, whom he has never met, having skipped out on her mother before the birth. Ever since, that incident has been the source of Price's deep and abiding shame. But now "No-Show" Bo has come home to face his demons and seek out a little forgiveness, which, given the circumstances, is not as hard to come by as one might think. At first glance, Broken Bridges is about reconciliations, and the movie must set some kind of record for the number of them that occur. Really, though, the movie is about the cross-marketing potential of contemporary country music. Director Goldmann, who cut his teeth directing videos for Shania Twain and Faith Hill, never misses a chance to punch-up an emotional scene with a contrived, heart-melting music performance by one or more of his stars. This technique is crass and cynical, and the songs are unbearable, but no doubt they'll help sell thousands of copies of the Broken Bridges soundtrack and of Haun's upcoming debut album (to be released on Keith's record label), not to mention translate perfectly to videos on CMT. 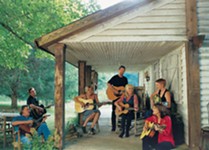