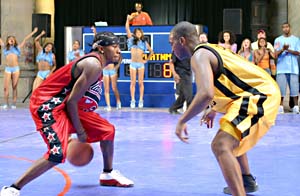 Writer-director Preston Whitmore II's basketball film is a well-intentioned but utterly clichéd slice of Detroit life. The film features the friendship and contrasting paths to success of two natural ballplayers, Tech (Mackie) and Noah Cruise (Jonathan), both of whom appear to be too old to be playing teens on the precipice of college. Noah has received a college basketball scholarship, and he plans to parlay the education into a medical degree. Tech is one of the local kings of street ball, a semi-organized league of underground competition. Friends since childhood, these two with different aspirations always have each others' backs – and this overcomes conniving women and unscrupulous management (Brady, providing serviceable work). Eventually, everyone learns the lessons that need reiterating, but there's not a single note along the way that isn't predictable and heavy-handed. (The only mystery here is how, with a name like Noah Cruise, no one ever asks the character about his ark.) Whitmore tries out all sorts of zappy camera edits, yet when it comes to filming a basketball game, he shoots mainly air balls. Crossover tries hard but never makes the leap. 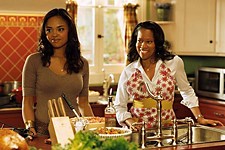 This Christmas
The film has the perfect formula for holiday cheer: redemption through sentimentality, salvation through schmaltz.