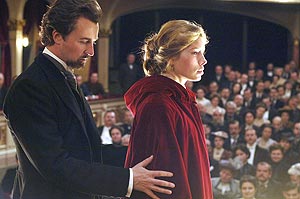 Surprisingly, this atmospheric movie starring some of the greatest actors of our time is a dull and enervating bore. Written and directed by Burger (Interview With the Assassin), the film is based on the short story "Eisenheim the Illusionist" by Steven Millhauser. It's a romantic story set in Vienna, circa 1900, about a magician who's in love with a woman from a superior social class. The two were childhood sweethearts before being forcibly separated. Fifteen years later, they have grown up to become the successful stage illusionist Eisenheim (Norton) and the Countess Sophie von Teschen (Biel), who is engaged to marry Crown Prince Leopold (Sewell). Although it's this thwarted love story that propels The Illusionist forward, it's the film's embrace of the enigmatic that nourishes its soul. Eisenheim's conjuring is seamless enough to cause audiences to wonder if his talents surpass sleight-of-hand and are instead some spooky ability to defy nature. The tricks are flawlessly filmed by cinematographer Dick Pope (Mike Leigh's frequent DP) and overseen by technical consultant Ricky Jay, and movie audiences will feel as dumbfounded as the Viennese spectators who flock to Eisenheim's shows. Stuck with the double-edged task of making the ineffable rational is the police inspector Uhl (Giamatti), who becomes the stand-in for the viewer trying to make sense of it all. Unfortunately he's caught between his own genuine fascination and the prince's demand that this magician with eyes for his fiancée be driven from town. The situation only worsens after a command performance in which the prince is humiliated by one of Eisenheim's tricks. Strangely, nothing is mentioned in the film about Eisenheim's obvious Jewishness as a further reason for the prince's desire to exclude him from Viennese society, though Prussian soldiers ring the film's periphery. Neither is psychoanalytic thinking a factor, despite this being the precise time and place of Freud's crowning achievements. The music score by Philip Glass is the best work the composer has ever done in film, accommodating both the mood of the period and his own signature style. Yet the performances by Norton and Giamatti are subdued and lifeless, despite the slight Viennese accents each brings to his role. Norton is not believable as a character driven by his passion, and Giamatti's usual expressiveness is constrained and unresponsive. The film's moody, dark palette and soft, inchoate backgrounds tend to lull the senses rather than actively engage the viewer. The magic practiced by this illusionist does not extend to the screen.