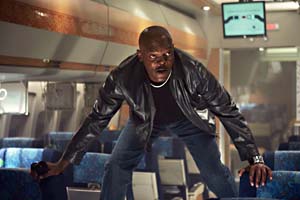 A solid little B-movie arriving cloaked in the dodgy garb of a fanboy phenomenon, Snakes on a Plane really ought to garner some sort of award for truth in advertising: It's exactly what it says it is and very little else. That doesn't make it a bad film by any stretch of the imagination – if anything, it takes some of the guesswork out of the late-summer moviegoing experience (Invincible? Accepted? Step Up? The Quiet? Your guess is as good as mine. Almost.) Somewhere along the line, however, Snakes on a Plane transformed from its original station as a fangy, albeit predictable, tale of airborne mayhem to something both more and less. The online hype surrounding the film is way out of line with its workmanlike direction. It begins (after some decidedly cut-rate titles) with motorcycling surfer dude Sean Jones (Phillips of Wolf Creek) witnessing a particuarly brutal murder by Los Angeles crime boss Eddie Kim (Byron Lawson), who promptly orders a hit on this inadvertant wrong-place-wrong-timer before he can turn state's evidence. (One of the film's running gags is the sudden, inexplicable gravity summoned by the very mention of Kim's name. All anyone has to do is ask, "You've heard of Eddie Kim?" and jaws kiss pavement.) Before you can say, "Skycap, there's a garter in my leggings!" the befuddled surfer is whisked out of sight by can-do FBI agent Neville Flynn (Jackson), who spirits his witness into the not-terribly friendly skies even as Kim arranges to have 1,001 poisonous serpents (hopped up on pheromonally-blasted leis, no less) pop out of the 747's cargo hold at 30,000 feet, with a reptilian eye toward bringing down the entire plane. As sky-high felonies go, it's a marked improvement over shoe-bomber Richard Reid's methodology, and one has to wonder why John Gotti never attempted such a brazen, witty move. Thus we have snakes on a plane, with Samuel L. Jackson, baddest of the bad, primed to save the day. Rumor has it Snakes on a Plane added five days of reshoots to pump up the gooseflesh 'n' grue quotient of the film, knocking it up from a PG-13 rating to an R in the process, and the resulting terror fairly echoes the kookiest moments of EC Comics' Shock SuspenStories heyday. We don't get just snakes biting people – we get snakes biting people's eyes, nipples, and something I'm only going to reference as the anaconda badonkadonk. (Take that, you masters of phallic symbology.) Director Ellis, who also helmed the recent wicked-fun Larry Cohen outing Cellular, never lets the action or the very thinly sketched characterizations slow down to give you enough time to say, "What the fuck?" Frankly, you're far too busy thinking, "Holy shit!" to give anything going on onscreen all that much thought. Only Jackson – acting in full-on God mode here and chewing scenery with breathless abandon, God love him – merits any sort of ponderables on the audience's part, and that mainly revolves around wondering why real-world sky marshals can't be more like this character. Phereomone-induced testosterone aside, and paraphrasing Sigmund Freud, sometimes a killer-snake movie is just a killer-snake movie, although with the sinewy legions of CGI wrigglers on board this production, it's tempting to think of the whole righteously over-the-top event as an exercise in exorcising male emasculation fears. To be sure, Snakes on a Plane is going to inspire some highly readable graduate-school film theses. You may even want to re-enroll to pen one yourself.