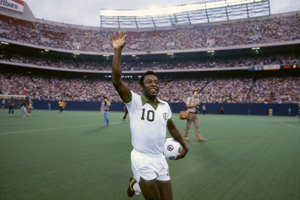 Once in a Lifetime

Fronted in the mid-Seventies by ultra-charismatic Brazilian superstar Pelé, the Cosmos were the heroic ideal for Yanqui kids like myself, who were only just then learning the joys of a sport that had already long been a part of the fabric of every other culture in the world. Soccer, for the first time in our nation’s history, had become, seemingly overnight, a mammoth draw that threatened to siphon off the fans who would otherwise be more interested in ham-fisted testosterone cases like “Broadway” Joe Namath and Roger Staubach or in how many teeth the New York Rangers had sacrificed that year. The unexpected rise and meteoric fall of the North American Soccer League in those heady, silly years is chronicled for the first time in Dower and Crowder’s charmingly chatty documentary, which ably tracks both the birth of the sport on these shores (a direct result of the sheer willpower of sports-mad Warner Communications honcho Steve Ross) and its ignominious downfall, which arrived, again, almost overnight with the leave-taking of Pelé just a few years later. And it never would have happened without the diplomatic skill of … Henry Kissinger. That’s no joke, either. Having bought the exceedingly ragtag New York Cosmos a year earlier, Ross set his sights on recruiting the best of the best for his fledgling footballing empire, and at that point the best was Edson Arantes “Pelé” Nascimemto, who had just retired from captaining the Brazilian team after leading them to two World Cup victories. The Braziian government, however, implored Pelé to play just one more season with his national team, while upstairs in El Norte, Ross offered up the sort of mad loot (an estimated $5.1 million) that might sway a hero from his home turf. But ultimately, it all came down to Ross calling in favors, none of which was more important than that of Dr. Strangelove himself, who broke the stalemate between Brazil and Ross and got Pelé on a plane to New York City. Ross and co-owners the Ertegun Brothers quickly packed their team with ringers, including Germany’s Franz Beckenbauer, Brazil’s Carlos Alberto, and the egomaniacal Italian Giorgio Chinaglia, whom many would later point to as being instrumental in the team’s downfall. Once in a Lifetime is packed with observations and recrimations, many of the latter aimed at or by Chinaglia, which makes for some gossipy entertainment. Who remembers, for one, that the Cosmos’ Shep Messing, at the height of his soccer career, posed nude for a women’s skin rag? Or that the team, players, handlers, owners, and all, were regularly bussed over to Studio 54 post-match to boogie the night away amid the Warholian glitterati of the day? Or that they sold out every one of Giants Stadium’s 77,000 seats at the height of their popularity, occasionally with screaming hangovers that would have felled lesser athletes? Once in a Lifetime’s only major failing is the fact that the iconic Pelé is seen only in period footage. Reports are that the filmmakers didn’t think it was worth expending the singularly vast amount of money the Cosmos’ superstar requested to appear in their documentary. They were wrong. Once in a Lifetime, John Dower, Paul Crowder