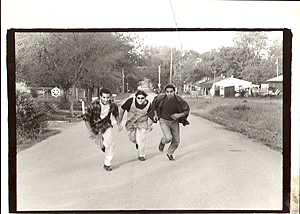 San Angelo purveyors of “Texican Rock & Roll,” Los Lonely Boys get a documentary to call their own in Austinite Hector Galán’s reverential look at the band, the culture, and various and sundry pit stops along the way to securing quadruple nominations and a win for Best Pop Vocal Performance by a Duo or Group at the 2005 Grammy Awards. Not unexpectedly, it was a long, circuitous path, but Galán, who’s covered Tejano music before (2001’s Accordion Dreams, 1995’s Songs of the Homeland), is more than up to the task. It’s well-nigh unthinkable that there are still Texans out there who haven’t heard of, if not swooned over, the Garza brothers’ exquisitely soulful blend of SRV-style, guitar-driven, conjunto rock & roll, so Cornfields and Crossroads wisely offers up much more than the standard tour-film fare. This is at its heart a classic barrio-to-Grammy story that begins with sibs JoJo, Henry, and Ringo returning to the outright adjulation of a hometown San Angelo crowd after departing some four months earlier for a whirlwind world tour that took them to Hawaii, New York, and points in between; meanwhile, their single “Heaven” and debut CD Los Lonely Boys was rocketing up the charts, eventually going multiplatinum. Family patriarch and longtime musician Enrique “Ringo” Garza Sr. and the close bonds of el familia are at the heart of Galán’s documentary, which looks back at the history of Tejano music in and around the San Angelo area – name-dropping old-schoolers like Los Gallitos and Los Tejanos – as well as the Garza boys’ high school love of both the music their father taught them on his knee, literally, and such pop-barrio-culture staples as those zoot-suiter favorites, Stacy Adams shoes. The film then moves on to their Austin debut at the Saxon Pub and discovery by producer Kevin Wommack, Willie Nelson, and local music standard-bearer Jody Denberg of tastemaking FM outlet KGSR. Cottonfields and Crossroads is crammed to bursting with reminiscences of the family’s ill-fated sojourn to Nashville, where they were laughed at by the clueless country-music cognescenti; the hard-charging drive that was instilled in the trio by Ringo Sr.; and assorted incidences of discrimination before their eventual triumph. This is a document of persistence, passion, and some of the finest rock & roll since Stevie Ray Vaughan’s untimely exit. 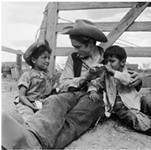 The Forgotten Americans
Galán turns his documentary lens on the dirt-poor colonias of the Rio Grande Valley.