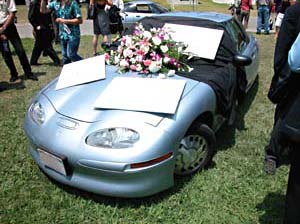 Who Killed the Electric Car?

Opening with a mock funeral for General Motors’ EV1 electric car, this multifaceted documentary seeks the culprit responsible for its demise and finds plenty of blame to go around. Arriving as it does on the heels of Al Gore’s surprise Hollywood hit, An Inconvenient Truth, which has caused the issue of global warming to enter the popular zeitgeist, Who Killed the Electric Car? seems like the obvious if circumstantial follow-up. Naturally appealing to environmentalists and techno motorheads, this film’s story also unfolds like a good murder mystery, broadening its scope into areas such as grassroots organizing, corporate conspiracies, and governmental interference. The history of the electric car presented here is also a largely California-based saga due to the state’s passage of the Zero Emissions Mandate in 1990 to deal with its smog problem. It required 2% of all new vehicles sold in California by 1998 to be emission-free. GM and the other American auto manufacturers began working on prototypes to fulfill the mandate, and by 1996 GM released the EV1, a completely electric-powered car that required no gasoline or motor oil. Despite consumer happiness with the vehicle, the entire fleet of EV1s was recalled by GM in 2001, and the film explores the reasons why. The film interviews owners, auto makers, legislators, and engineers to find out why the car posed such a threat to the status quo and the welfare of the many auto-related industries. Most notably, the film uncovers the duplicitous GM campaign in which it agitated against the Zero Emissions Mandate while also complying with the law by building the required cars. Talking out of both sides of its mouth, GM waged war against its very own product, and numerous examples of this corporate dodge are enumerated in the film. Also highlighted is the current Bush administration’s oil-friendly stance and the demise of the EV1 that coincided with the Republican return to office and their alternative promotion of hydrogen fuel. Public attitudes against the perceived shortcomings of the electric car are not left off the hook either. The film devotes too much time to the emotional insights of laid-off EV1 sales-specialist-turned-activist Chelsea Sexton. And the sing-songy narration by Martin Sheen won’t do much to woo the unconvinced. Yet you’ll leave the film wondering why you’ve never seen a TV ad for an electric car, or why GM is all about selling Hummers these days.

Revenge of the Electric Car
...