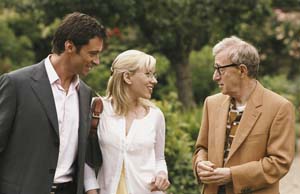 Woody Allen's previous film, Match Point, seemed to signal a rebirth of sorts for the aging auteur. Apart from the opening credits, Allen's signature style was absent, save for thematic similarities to his brilliant Crimes and Misdemeanors, and the film itself was as taut and involving as any thriller in years. Allen attributed the breath of fresh air to a change of settings (New York to London) and to his discovery of a new muse in actress Johansson. Judging from his follow-up, Scoop, the novelty of these elements wore off quickly. Allen's second British film with Johansson finds the director falling back into the rut he carved for himself with every forgettable comedy since the underrated Deconstructing Harry. Unlike Match Point, his fingerprints here are apparent from the first scene, during which recently deceased journalist Joe Strombel (McShane) rides a Grim Reaper-driven boat to the afterlife. Bored, Strombel makes small talk with the victim of a notorious London serial killer and discovers that the murderer is likely famous playboy Peter Lyman (Jackman). Strombel is livid: The story of the year just fell into his lap, but he can't pursue it. Not to be dissuaded, he jumps off the boat and manages to materialize in front of a plucky young journalism student, Sondra Pransky (Johansson). At the moment, she is volunteering in a magic show put on by neurotic illusionist Sid Waterman (Allen). Strombel's ghost shares the tip and demands that Pransky and Waterman find the evidence to write an article exposing the criminal. Once she meets the charming Lyman though, Pransky finds herself falling for him. Johansson's performance as a naive college student is a stretch, and while Jackman tries hard, he can't overcome the fact that his part only exists to serve the plot. Allen puts forth an inspiring amount of energy, but he's certainly not breaking new ground with this caricature that he's played many times before. However, Allen executes the screwball setup with impeccable comic timing, and the murder-mystery plot unfolds with the same subversion of audience expectations that made the third act of Match Point such a nail-biter. Still, it all feels inconsequential. There are plenty of opportunities for Allen's acute philosophical musings on death, love, and fate, but he aims only for laughs. Often, he gets them, especially in several scenes in which Waterman pretends to be Pransky's rich father at cocktail parties. But Scoop suffers from the same problem as much of Allen's recent work: Even when the witty banter clicks, it seems stale. In fact, it often seems possible that Allen already used some of the jokes verbatim in one of his three dozen previous films. Years ago, when Allen's inimitable comedy style still seemed fresh, Scoop may have joined the ranks of Sleeper and Take the Money and Run as a comedy classic. Today it provides a pleasant diversion, but will likely be forgotten by most along with other recent efforts like Small Time Crooks and Curse of the Jade Scorpion.