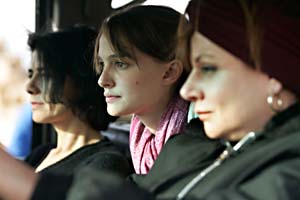 AFS@Dobie Free Zone's opening sequence – an unbroken, 10-minute-long shot of Portman weeping in the back of a rainswept automobile – so thoroughly sums up the seemingly self-perpetuating emotional, political, and spiritual states of the Israeli-Palestinian conflict as to render the other 80 minutes of this film utterly superfluous. Still, Israeli filmmaker Gitai has much on his mind during the remaining running time, and while his film is frequently as frustrating (and very nearly as protracted) as its real-world counterpart, the maelstrom of chaos churning at the heart of his story should serve as a lesson to Westerners who wonder – or, more likely, don't wonder very much at all – "What the hell's wrong with those people?" Gitai, who directed the Israeli segment of the ambitiously global anthology film 11'9"01: September 11, here limits his players to a mere trio, all of them women. Portman plays Rebecca, an American who has arrived in Israel only to have her soldier-fiancé leave her in the lurch (and, stingingly, stranded beside the Wailing Wall). Unmoored, she begs a ride from Hana (Laszlo), the wife of a man who makes his living retrofitting armor onto passenger cars. Hana is on a mission to Jordan, where she hopes to collect a debt of $30,000 from "the American" with whom her husband conducts business. After a drive that's part travelogue and part snooze (during which Rebecca marvels at the eerie proximity of "the things you only see on television"), Hana reluctantly accepts some equally reluctant assistance from Leila (Abbass), a Palestinian woman as flighty as Hana is stoic. Together the three skirt the edges of a regional calamity, both literally and figuratively, as they thrust and feint there way through an ideological quagmire that, as in the real world, seems to be at once glaringly simple to resolve and maddeningly devoid of an exit strategy. Gitai's film is lashed to current events even more than when it was initially released (in Europe and the Middle East; it's also been much ballyhooed as the first Israeli feature to be shot in an Arab country), and it's impossible to separate what you see on the theatre screen from what awaits you at home on CNN. This gives the film an almost surreal patina of hyper-reality and makes for a bizarre viewing experience made all the more so by the actors' blithely matter-of-fact conversations. Gitai is plainly hoping to expand on the arguments that fuel the ongoing barrage of Middle East ordnance, but the milieu he chooses – essentially one long, queerly prosaic car ride to nowhere – robs the film of much of its dramatic force. Of course, he's also, apparently, presenting the Arab-Israeli conflict as the world's most annoying dysfunctional family road trip, which renders the proceedings almost as exhausting as the real thing. Even with Natalie Portman in the back seat, that's a hell of a ride and twice as combustible. 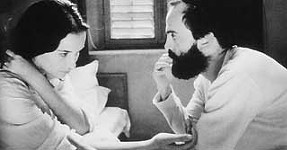 Kadosh
Our notions of romantic love owe so much to the movies. Over the past century, they have provided us with countless role models and ideals, ...