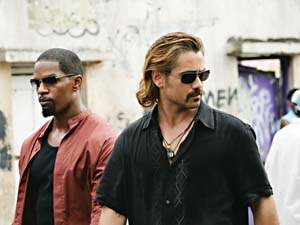 Very nearly as electrifying as one of South Beach's ubiquitous pastel-peach beachfront cabanas or, alternately, an iridescently deceased jellyfish stranded at low tide and awash in sand fleas, Mann's edgy (read: underlit) take on the vacuous Eighties television cop-opera takes perhaps one too many cues from its cathode predecessor. For one thing, it's all style and precious little substance, drowning in a chromium murk (courtesy of Collateral's director of photography Dion Beebe), which manages to make this most garish of Floridian playscapes into a dreary, overcast hellscape, alternately queasy and threatening. For another, Farrell and Foxx, as libidinous detective Sonny Crockett and his marginally more grounded partner-detective Ricardo Tubbs, have all the mumbly chemistry of a late Mickey Spillane hangover. There's style to burn, but it's not the kind you'd want to have on your walls, unless crimson back-spatter is the "new black." The script, from Mann, has the formerly five-o'clock-shadowed duo chasing down a rogue drug cartel and Sonny falling for sexy Asian money launderer/moll Li, but the real emphasis here is on globe-hopping. The film jets (and "go-fast" boats) from stateside to Cuba to Colombia to elsewhere with the only noticeable result being that you may well want to book next year's summer holiday in old Havana – the place, in Mann's universe, anyway, has lost little of the sleazy charm on display in 1964's slice of Soviet agitprop Yo Soy Cuba, and I hear tell the cigars are to die for. There's plenty of death in Miami Vice as well, predictably so, with double-crosses galore and a token appearance by the Russian mob and the Aryan Brotherhood, two criminal enterprises not known for their sartorial splashiness. Even former style avatars Crockett and Tubbs appear to be dressing down these days, trading in their goofy Eighties Italianate pastels for more somber hues worn with the deadly air of men on their way to a funeral, preferably their own. Miami Vice's one saving grace, and it's a slim one indeed, comes from Mann's tried-and-true, ultra-choreographed ballistics ballets, including one deafening, third-act rain of cordite and lead that threatens to make you leave the theatre limping. And that's the good news. Perhaps vice isn't what it used to be, or maybe Crockett and Tubbs just aren't all that interesting when removed from their appropriate time slot, but this may well be the dreariest and most monochromatic time you'll have at the movies all summer.