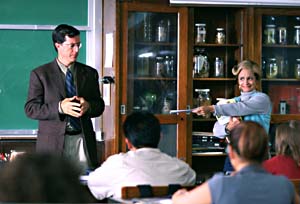 Strangers With Candy is the kind of TV show and movie that begs for a cult following. Surreal and hilarious, the comedy may not be for everyone, but when you get it, you can't stop laughing. With a format that lampoons afterschool specials, the writing is a brilliant collaboration of the obviously absurd (the principal is an African-American named Onyx Blackman) and the wryly satirical. (Lessons include "Never encourage the handicapped, it'll only get them hurt" and "Reading and writing are deadly.") Die-hard fans of the Comedy Central show (which ran for three seasons from 1999-2000) will be acutely aware that while the film version premiered at Sundance in 2005, licensing problems and a change in distributors held up the release until now. And we can all rejoice. At once subtle and completely over the top, the comedy of co-creators Dinello, Colbert, and Sedaris rivals The Simpsons and Team America: World Police in its audacity and absurdity. The jokes are nonstop and the attention to detail inspired. The premise of the film, expanded as a kind of prequel from the TV show, begins with Jerri Blank (Sedaris), the 46-year-old ex-junkie, ex-con returning to high school. Disturbingly genius, Sedaris (sister of David) takes on her role with a kind of Sellars-esque transformation. Because her father (Hedaya) has been in a grief-induced coma since her departure 32 years prior, Jerri decides to return to high school in an attempt to restart her life and resurrect her dad. While obsessive fans will miss some of the original cast members, their replacements suffice. And in the end, it's really about the chemistry and talent of Sedaris, Dinello, and Colbert (of The Colbert Report and The Daily Show). Pushing his straight-man face to new heights of comic melodrama, Colbert collaborates in hilarious harmony with Dinello's effeminate art teacher. Celebrities abound and though some appearances are brief, they're all solid. Janney and Hoffman give excellent restrained performances as school-board officials, Holm is perfectly cast as the dotty physician, Parker shows her well-honed comedy chops as a boozy grief counselor, Broderick is a treat to watch as a vainly competitive science teacher, and the memory of Kristen Johnson attempting to correctly park her electric wheelchair will bring a smile to my face for quite some time. From Jerri's studded leather earrings and fringed stone-washed jeans to the schoolbooks she carries on her first day (a phone book, a cookbook, and an encyclopedia on mushrooms and toadstools), the details are unexpected and very funny. Fans of the show will rejoice, and a few newbies will become converts. In this heightened reality, there are no rules except to get the laugh. And they do, incessantly. (See Screens feature"Blank Generation" for an interview with Amy Sedaris.)

Ghost Team
A group of losers stumble onto paranormal activity 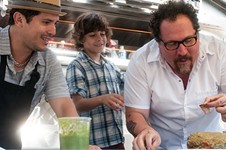