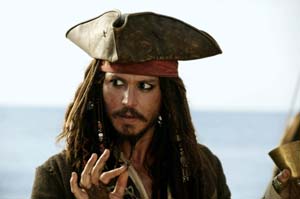 For all the talk about the lengthy running time of this sequel to 2003's surprise pirate hit, by the time the end credits scrolled, I felt more like I'd been strapped into a Tilt-A-Whirl that was itself welded atop the pace car at the Indy 500, which, in turn, somehow became ensnared in the Man of Steel's cape. And he was, you know, like, flying real fast and stuff. Through space or something. Suffice it to say, Pirates of the Caribbean: Dead Man's Chest is hardly the wildly overlong snoozer the 2 1/2 hours required to view it might suggest. On the other hand, I'm canceling the sushi date I'd scheduled for this evening, in sympathy with our Oceanic Friends who, at the hands of George Lucas' Industrial Light & Magic, have been transformed from simple, lovingly presented slices of uni and ebi into all manner of bipedal beasties that are forced to do the bidding of Davy Jones (Nighy) as he captains The Flying Dutchman above and beneath the briny deeps in pursuit of Depp's still-brilliant caricature of unbuckled swash, "Captain" Jack Sparrow, he of the super-Max Factored lids and garishly effete mannerisms. Unlike the opening cannonade in what will eventually be a trilogy (Pirates of the Caribbean: At World's End was filmed back-to-back with this outing and will be released the same time next year), this salvo is a bit much. Of course, there are those who would say the original was a bit much, and they'd be right. But pirate films by their very nature should always be a bit much, just not too much, if you catch my driftwood. From Captain Blood to Treasure Island (Disney's 1950 version, that is) to, God help us, The Pirate Movie, the genre will always be buoyed aloft on the swells of outrageous action, ridiculous couture, and the derringest of do. There is a thin line between staying faithful to the spirit of buccaneers past and high, goofy camp that makes you crave a fistful of Dramamine. Unlike, say, Cutthroat Island, which fell afoul of the latter, Dead Man's Chest straddles amidships, occasionally listing to port or starboard and leaving in its wake nothing so much as a mildly churning gut, as though you've imbibed one too many bottles of rum with your daily ration of yo's and ho's. Still and all, Verbinski and his cast (virtually all of the original members return) know what we like and give it to us by the barrelful. There's Depp, masquerading as a post-falling-out-of-that-tree Keith Richards (lest we forget, he snagged an Oscar nomination the first time 'round), of course, but here he is matched mannerism-for-mannerism by Nighy's man-octopus-lobster, (moctster?), Davy Jones and Knightley's gutsy, proto-riot, grrrl Elizabeth Swann. Nighy, to his immense credit, manages to act his way out from under several pounds of latex and goo and ultimately reminds us of Robert Shaw's leathery Quint trapped within one of H.P. Lovecraft's batrachian tentacle-fests. Action set-pieces abound, and Verbinski is very, very adept at seamlessly melding CGI backgrounds and critters with his flesh-and-blood actors. It's all a bit much, yes, a bit exhausting, that's true, but then why on Earth would anyone expect otherwise? Sometimes it's enough just to aim your prow into the onrushing wave, cross your fingers (or cutlasses), and hope you survive with your sense of humor intact.