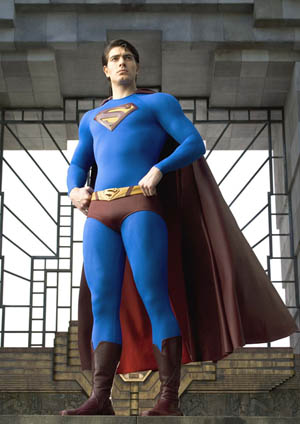 Superman (Routh) returns to Earth seeming more like a humbled prodigal son than an invincible superhero. He crash-lands back on the Midwestern farm of his boyhood after an absence of five years spent searching the universe for his roots. Knowing full well that the planet Krypton has been destroyed, he goes there to see for himself that he is the last of his people. Doomed forever to be a man without a planetary birthright, he returns to Earth, a place that has an ever-renewable need for superheroes. His adopted Earth mom (Saint) is happy to see him, and his old reporter job at The Daily Planet, where the Man of Steel works undercover as the mild-mannered newsman Clark Kent, is still available. Lex Luthor (Spacey) is again on the prowl for world domination. Everything is just as it was before, except that Superman’s love, Lois Lane (Bosworth), has moved on. She’s mothered a child and is cohabiting (yikes!) with her boss’ nephew Richard (Marsden), a man given to flying small planes. Moreover, she’s about to receive a Pulitzer for an article titled “Why the World Doesn’t Need Superman.” Ouch. The depth of Superman’s solitude is conveyed in a scene in which he uses his X-ray eyesight to peer into the domestic life of Lois and Richard at home – a creepy act that would amount to stalking or Peeping Tomism for mortals, but a moment of deep poignancy for Superman, whose destiny estranges him from similar domestic contentment. Director Singer and his fellow screenwriters, Michael Dougherty and Dan Harris, have concocted a delicate balancing act with their Superman epic: The film acknowledges the realities of the present day while also falling in line with the past. From the film’s opening moments, as those familiar-looking credits zoom into focus from deep within outer space and John Williams’ anthemic theme music reprises, we’re put on notice that this new film will be one to honor its roots (at least Supermans I and II). Even footage of Marlon Brando as Superman’s father Jor-El is revived for use here, and Brandon Routh’s physical resemblance to Christopher Reeve, the iconic star of Supermans I through IV, is certainly no coincidence. Superman still fights for “truth and justice,” but the part of that phrase that includes the “American way” has been toned down to “truth, justice, and all that stuff” (which, probably helps us accept a world where Lois Lane is living in sin and Superman is out catching petty bandits instead of Osama bin Laden). Singer’s action sequences are terrific (and make us anxious to see the IMAX 3-D version of the film, which is due to come to Austin in early August), and while taking nothing away from Superman’s aerial abilities and megastrength the action sequences also depict Superman struggling against the laws of physics and practical realities like there being no way to get a perfect grip on a nosediving jetliner. Although the theme of father-son conflict and Christ (and Moses) motifs are nothing new to the Superman universe, it must be said that Singer lays on the savior iconography with thick brush strokes. Various fans and critics are decrying the film’s casting choices, however everyone seems well-cast to me. Instead, the problem lies with the scarcity of what these characters ultimately are given to do onscreen. Lex Luthor’s plot to create more real estate from a crystal is dopey, and with actors who can be as deliciously vicious as Spacey and Posey (as Luthor’s moll), it’s regrettable they don’t get more screen real estate. We come away from the film with insufficient emotional attachment to these touchstone American characters. Yes, this Superman soars, but he doesn’t always take us with him.