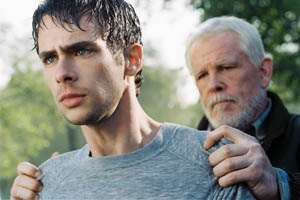 Yoda, of course, said it best: "Adventure? Excitement? A Jedi craves not these things." And yet they're the same psychological impediments that keep hotshot UC Berkeley gymnast and stridently cocksure Olympic hopeful Dan Millman (Mechlowicz) both relatively earthbound and emotionally constrained. His force is a tad too forceful, you see, his Han forever solo no matter how many times he gets, um, Leia'd. What this arrogant prick needs is less post-practice bed-hopping and more inscrutable Zen koans from the likes of Nolte's mysterious midnight auto mechanic, whom Dan dubs Socrates after their first 3am exchange ends with the aging grease monkey leaping, to all appearances, a humanly impossible 12 vertical feet onto his service station's rooftop. With his interest duly piqued, Dan, who's been suffering from performance anxiety and one of most disturbing nightmares yet put to film (as evidenced by the film's attention-grabbing opening sequence), allows himself to be tutored in the higher psychological arts, à la The Karate Kid. That means cutting his hedonistic instincts to the quick and abandoning pleasures of the flesh altogether, a curtailment he does not take to as gracefully as he does the pommel horse. Peaceful Warrior is adapted from the semiautobiographical novel The Way of the Peaceful Warrior by the real-life Millman, and it's an odd, puzzling film. For instance, what are we to make of Nolte's nameless cipher? There are hints throughout the film that the character may be all in Dan's head, but if that's the case, it's never fully revealed why or how this helpful, Miyagi-esque bugaboo arrived, or, really, if Dan's gone round the proverbial bend, or much of anything. Some audience members will find the story's persistently vague tone annoying, but director Salva (Powder, Jeepers Creepers) has something else in mind, though I never quite figured out what that something was. Warrior has elements of suspense, thriller, even horror films, which dovetails with the director's previous work, but it also seems to be striving for more than the simple brass ring of the usual sports biopic. There's a genuine sense of mystery to the film, aided in no small amount by some breathtaking cinematogrpahy (from Sharone Meir) that thrusts the viewer up and into the rings with the athletes, amid puffing thunderheads of grip chalk and the pattering rainfall of sweat on mat. As Dan, Mechlowicz is more than convincing – he might as well be a gymnast himself (and as Dan notes in the film, it's the most physically difficult of all the male-dominated sports). Mechlowicz is equally adept away from the role's physical demands; his quasi-romance with Socrates' pal (friend? daughter? It's never explained) Joy (Smart, terrific as always) has the hopeful ring of truth to it, and his character's ungraceful arc from jerk to Herc is the better for it. Above all, there's Nolte, who hovers over the whole production like some sapient force of nature. It's mostly hoo-hah, sure, but there are moments in this New-Agey, feel-semigood crowd-pleaser that rise above and beyond the ropes, rings, and willfully calm psychobabble. 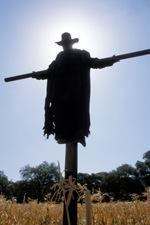 Jeepers Creepers 2
This horror sequel is more snooze than nightmare.