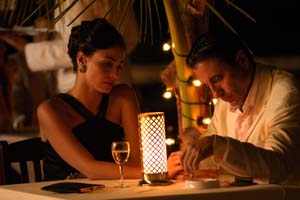 Garcia’s narrative directorial debut, in which he also stars, is an obvious labor of love. The Lost City honors the filmmaker’s memory of the look and the sounds of prerevolutionary Cuba – a tropical playground for the well-to-do that came to an end with Castro’s takeover in 1959. Garcia’s retrovision is an exile’s lament, more a dirge for what has vanished than a celebration of the past. His Havana has a burnished elegance (compliments of cinematographer Emmanuel Kadosh), one that pits the carefree patrons of the arts and nightclubs against the bearded barbarians enforcing revolutionary ascetics. With a script by the recently deceased writer Guillermo Cabrera Infante (Three Trapped Tigers), The Lost City is the work of a fellow exile. Yet the film has a host of problems – the least of which is its exclusive perspective on the upper classes who had the most to lose from the revolution, though its unromanticized portrait of Castro’s compadre, Che Guevara, as a brutish thug will contrast with the recent sympathetic film portrait of the revolutionary leader in The Motorcycle Diaries. The Lost City is mired with one-dimensional characters and a storyline that slogs along like a humid island afternoon. Garcia plays Fico Fellove, the proprietor of El Tropico, a top Havana nightclub in the days before the revolution. Unlike his two brothers (Murciano, Carbonell), who are both active participants in the growing revolutionary movement, Fico calls to mind Casablanca’s Rick, whose nightspot aimed to be a late-night DMZ where the politics of the day gave way to the blur of the night. Overlong by a good half-hour to 45 minutes, The Lost City gets sidetracked with a fruitless love story and Fico’s indecision about what to do once his nightclub is removed from his ownership. The movie is as languid as its tropical setting, and even Hoffman’s brief turn as the gangster Meyer Lansky doesn’t usher in a fresh breeze. The usually welcome Murray plays a character simply called the Writer – a self-described “standup comedian who prefers to remain seated.” The figure and his droll non sequiturs are clearly a stand-in for Infante, but the Writer is ultimately an inscrutable character and a narrative distraction. The only facets of The Lost City that contain life are the numerous music and dance sequences, in which a vibrant sense of the old Havana comes across. Garcia also wrote the music, and it’s as lovely to listen to as his movie is to look at. However, even though the movie is made with an abundance of heart, it’s sad to report that the final result has only a weak pulse. 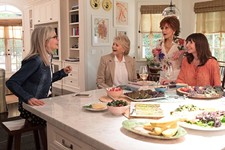