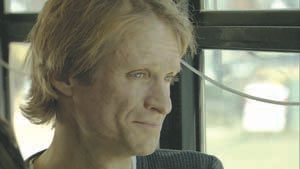 You may need a flow chart to keep track of all the various characters and their twining relationships in this debut feature from Austin director Marchbanks, but the end result is well worth the effort. Shot in town with a mostly local cast and buoyed by a fine, evocative score from Jonathan Meiburg and Travis Weller (as well as a who's who of Austin bands spanning everyone from Zykos to Moonlight Towers), Fall to Grace is one of those quiet little ensemble films that tend to get lost in the shuffle. Thanks to top-notch performances from the entire cast (the luminous Pozehl turns in a knockout performance in every sense of the word) and some of the best cinematography Austin's ever produced (courtesy of Jay P. Lipa), this is one sleeper that leaves you anything but drowsy. Pozehl plays Sarah, the emotionally drifting teenage daughter of struggling diner owner Leo (Stokey) and his druggy harridan of a wife Audrey (Garcia). Spending her days between school and scoring drugs from her uncle Auggie (Johnson, Leatherface of The Texas Chainsaw Massacre 2), she's a character in search of a reason. She finds one in the form of classmate Kristopher (Luna), the son of Georgian immigrants Alexei (Crow) and Helena (Polozova), whose innate goodness (and soulful eyes) engage her in ways she's only just discovering. Alexei, the son of a famous circus clown, works day-labor jobs to provide for his family, but the snaky tendrils of Auggie intrude even here. There's much more to the story, almost too much, but at its heart, Marchbanks' film is about the bonds that exist in small neighborhoods, where territoriality isn't neccessarily a bad word (think Spike Lee's Do the Right Thing minus the racial showboating) and people's lives are unconsciously connected. Fall to Grace's only problem arises from the borderline melodrama of Auggie's garish thuggery and a third-act tragedy that, while convincingly shot and acted, still feels forced. As the saintly paterfamilias Alexei, Crow turns in a performance that's both subtle and fully formed, which is a pretty good description of Fall to Grace itself. Like a real neighborhood, it pulses with its own unique heartbeat, and it's one that deserves to be heard.