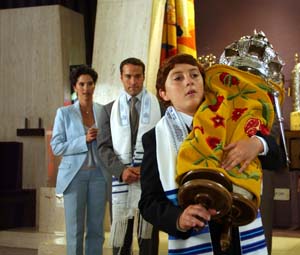 Keeping Up With the Steins

Scott Marshall's film, a Los Angelean battle of misplaced bar mitzvah one-upmanship, should, by all rights, be very funny and certainly kick out some genuine guffaws. It doesn't, sadly, but by this day and age, everyone from the Taliban to the RAHOWA skinheads to Deepak Chopra and the Dalai Lama, the pope, and Hizzoner Ed Koch knows that even the best, smoothest, Xanax-free bar (or, for the girls, bas-) mitzvah is rife with comic possibility, and I speak from experience here (white-knuckled, bowel-shredding, dread being the hallmark of my own rite of passage back in 1980). For the goyim wondering what the big deal is – "Isn't it the same as, you know, Confirmation?" – well, no, not unless your nervous, 13-year-old mind is able to master the Torah scripture, in the ancient Hebrew – no vowels, even – that you chant to the assembled throng in a lilting, dirgy meter that's less Gershwin, more Torquemada. That's bad enough, but when you add to that the requisite post-synagogue celebration, with all those freaky, cheek-grabbing relatives and the overall sense of exhaustion undercut with pride and every kid's youthful sense of "What now?" it's a doozy of a day. So I had high hopes for Marshall's film, which features his father, Garry, as the free-spirited grandfather who ran out on his wife (Roberts of Everybody Loves Raymond) and son Adam Fiedler (Piven) – the latter now, fitttingly, channeling that abandonment rage into a successful career as a Los Angeles talent agent. The impending bar mitzvah of Adam's son Benjamin (Sabara of Spy Kids) becomes both an overwrought pissing contest between Adam and his estranged father, as well as his ex-business partner (Miller, smarming it all the way to the promised land), who earlier threw his own bar-mitzvah boy a lavishly tacky Titanic-themed event that Adam must now attempt to top, if he can. Poor Benjamin just wants to get through it alive, of course; he's the only real mensch in the film, but Marshall's sage, goofy grandfather sees the kid's rocketing stress and comes to the rescue quite nicely. Keeping Up With the Steins isn't a bad film – it just devolves into the limp sort of schmaltzy conclusion you keep hoping it will avoid. Almost any episode of Freaks and Geeks captured both the high anxiety of young males, Jewish and otherwise, much more affectingly, and with a far better sense of where the borderline between childhood and not-childhood begins to blur. Kudos, though, to Adam Goldberg's psychotically memorable cameo, and a fleeting reference to that other confused Benjamin (Braddock, of The Graduate) involving a sensible time-out in the family pool. It seems "plastics" just doesn't cut it as sage advice anymore. 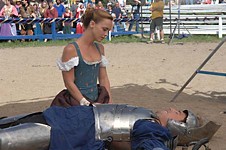 All's Faire in Love
Christina Ricci stars in this strained romantic comedy set in the world of renaissance festivals.