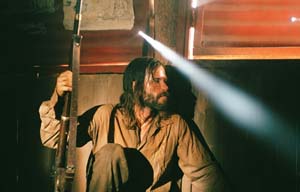 Despite perpetual rumors of its demise as a genre, the Western is alive and well in the Australian outback. The Proposition, whose screenplay and score are by cult musician of gloom Nick Cave, follows in the gritty tradition of Sam Peckinpah, John Huston, and Robert Aldrich – American filmmakers who made Westerns about strong-willed men and the individualized codes by which they live. This Australian outback comprises its own kind of badlands: harsh, inhospitable terrain that provides cover for desperados so completely beyond the human pale that they seem to have more in common with wild animals. The story is set in the 1880s, when the English still ruled the continent, wresting the land from the indigenous peoples and claiming it for their own. Yet law and governance remain distant realities, and their application even more remote. Into this stark, unremitting country comes Capt. Stanley (Winstone), a lawman/soldier whose single-minded desire becomes the apprehension of the defiant Burns brothers. Wanted for rape and murder, the three Irish Burns boys appear to commit their crimes – against white people, no less – for sheer thrills. Stanley captures two of the brothers in the film’s brutal opening shoot-out and presents the elder Charlie (Pearce) with an impossible proposition: Stanley will hold young, dim-witted Mikey Burns (Wilson) in jail until Christmas day while Charlie hunts down and kills his psychotic renegade brother Arthur (Huston), who is holed up in the outback. The stark duality of the plot echoes throughout the film, especially in its striking production design. Striking a dainty blow against the untamed frontier is Stanley’s wife, Martha (Watson), who creates an illusion of English propriety in the midst of the primitivism. Her china teacups and delicate Christmas ornaments complement the garden and white picket fence she’s staked around her house on the frontier. The performances all strike a perfect note. As Stanley, Winstone’s sweat-profusing body seems emblematic of his situation, while Watson’s small, feminine frame reflects civilization’s uphill battle. Peace remains inscrutable, especially when up against the drunken, Darwin-spouting bounty hunter played by Hurt. As the wild yet poetically inclined brother Arthur, Huston has never delivered a performance this good. He becomes the dark, unknowable heart of the story. Not since the great Once Upon a Time in the West have so many flies appeared in a Western: They seem as inured to swatting as do lawless humans in this godforsaken place. Cave’s droning, incantatory music on the soundtrack provides an aural equivalent for these sweat-sucking pests. Like the countryside it portrays, The Proposition is visually brutal and bloody. Delicate sensibilities are pummeled rather than spared. “Civilization” emerges from a gun barrel, and its discontents are everywhere. 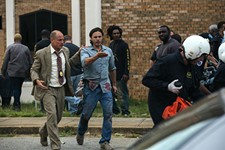 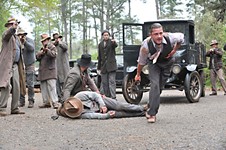