In their first feature, former Austinites the Duplass brothers – Jay directs, Mark acts and produces, together they write – have made a near-perfect relationship-trauma comedy. It’s ragged in all the right ways, just like the way we love and wake up to the realization that that love has gone sour. It hasn’t soured completely for Josh (Mark Duplass) and Emily (Aselton), but something’s off for sure. They’ve been together for years, and, now in their mid-20s, they’re treading water. She’s wants a proposal; Josh, as his father puts it, is waiting for something either really good or really bad to happen to make the decision for him. They get good and bad and everything in between when they embark on a road trip from New York down to Atlanta with the goal of picking up a purple fabric La-Z-Boy recliner that Josh bought off of eBay. It’s a replica of the puffy chair his father owned in the Eighties; they plan to deliver it to Josh’s father in Atlanta as a birthday present. Sounds simple enough, but from the moment they stop to pick up Josh’s neo-hippie brother, Rhett (Wilkins), they meet one complication after another, most of them the result of Josh’s well-meaning but relentless ineffectualness. He’s a particular brand of hipster-in-a-hoodie, one who used to be a rocker but settled into being a booking agent; it’s hinted that Emily pressured him to abandon his band and, most significantly, the brutal touring schedule that kept him away from her. Their relationship is a house of cards of hints like this, artfully mimicked in the sometimes-fidgety camerawork that shifts in and out of focus, much like the balance of power in their relationship. They’re mired in the universal ways of dysfunctional couples – the doublespeak and hidden agendas – but the film works so well and cuts so close to the bone because Josh and Emily are at once immediately recognizable and entirely unique. They have their own language, hard-earned after years together, their own way of communicating (an amalgam of baby talk and an old-man-gumming that seamlessly trips between endearing and aggravating) and their own way of rocketing the other into giggle fits or blind rages. It’s all so goddamn realistic and reminiscent of real-life love (and how often does that happen onscreen?) that The Puffy Chair would be hell to watch if it weren’t so funny. There’s comedy gold in the many indignities the puffy chair must suffer, and even more to be mined in the abuses the three travelers hurl one another’s way. The film is scored to a hell of a road mix, an indie rock wet dream of a soundtrack (Matt Pond PA, Of Montreal, Death Cab for Cutie) that’s never used indulgently – no “this song will change your life” cringe-isms to be had here. The Puffy Chair would never presume so much, and it’s in that unassumingness that this little charmer wins your heart, even as it’s breaking it. (For an interview with the filmmakers, see "Stopping Loose, Long or Short.".) 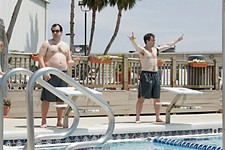 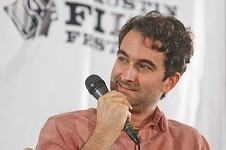 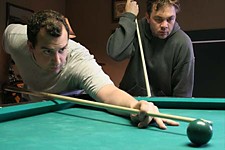 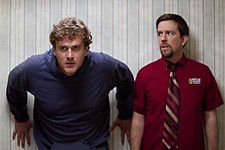