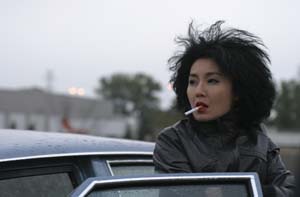 AFS@Dobie Clean is one of the most emotionally honest movies about drug addiction ever made. Well, maybe not addiction per se, but rather the attempt to disgorge oneself from heroin’s grip. Assayas’ film is not about the thrill but what happens once the thrill is gone. The probing French director, probably best known stateside for Irma Vep and Demonlover, surpasses his previous work with this film, and he does it without sensationalizing, editorializing, or overdramatizing the subject matter. Assayas is abetted in this effort by the sterling central performance of Cheung (In the Mood for Love), the director’s ex-wife for whom he wrote this role. As Emily Wang, the trendy heroin junkie who is trying to go clean, Cheung delivers the goods: Her performance (in three languages no less – English, French, and Chinese) is so note-perfect that it earned her the Best Actress award at Cannes in 2004. Realistic, almost to the point of affectlessness, Emily is not entirely certain that the drug-free life is for her. It’s not something she chose but is instead imposed by a six-month prison sentence. Cheung plays a variation on the classic rock & roll spouse – there are shades of Courtney Love and Yoko Ono in the portrayal, but not really: Emily is a unique character. Her partner, a once-great musician (Johnston, one of Nick Cave’s Bad Seeds), has lost his groove, and whether that’s due to the heroin already in his bloodstream or he turned to dope to escape his sense of failure is unknown. What is obvious is that all their friends and the press regard Emily as the cause of his downfall. That’s certainly what her estranged mother-in-law (Henry) believes, although her husband Albrecht (Nolte) is privately more generous. These in-laws are the guardians of Jay (Dennis), the child their son had with Emily but parked with his grandparents since the young couple recognized they were unfit parents. Almost equally moving as Emily’s situation is the plight of Albrecht, who is not only caught between accommodating his wife’s anger and his daughter-in-law’s need but also stark evidence of his own mortality. Nolte is terrific as usual, and even though he’s playing another terse hulk it’s interesting that this reticent character is the only one to demonstrate to Emily a belief in forgiveness and the possibility that humans can change. Capturing the subdued drama is Assayas’ fluidly moving camera (by DP Eric Gautier) that hunts for the interesting aspects of each shot, bathing the action in long takes and excising the inessential through jump cuts and temporal elisions. Background music by Brian Eno and Tricky also augment the story’s unmoored state of consciousness. Assayas manages it all without resorting to false melodramatics or 12-step redemptions, although his film’s third act is not quite as stringent as its first two. Still, Clean’s total package is a sobering experience.