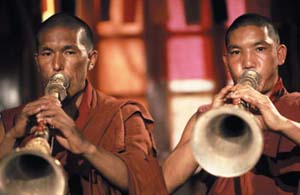 AFS@Dobie You don’t have to be a student of Buddhism to be entranced by the dreamlike images that form Coleman’s intimate portrait of Tibetan monks. More a meditation than a traditional documentary, Tibet: A Buddhist Trilogy beautifully employs direct cinema techniques to transport the viewer into the world of an exiled culture. Shot in Northern India and Nepal between 1974 and 1978 and released internationally in 1979 in a nearly four-hour version, the trilogy has now been recut by nearly half, remastered, and rereleased – reminding the viewer of the peerless beauty of shooting on film. The opening titles provide a brief recounting of China’s invasion of Tibet in the 1950s, resulting in the destruction of 6,000 monasteries and death of two million Tibetans. The Dalai Lama and more than 100,000 refugees fled their homeland and resettled largely in India, Nepal, and Bhutan. Following suit with the creative genius of the great observational documentarians Fred Wiseman (Titicut Follies, High School) and Robert Flaherty (Nanook of the North), the filmmakers employ patient observation in their exploration of this exiled culture. The minimal expository narration quickly falls away, and colorful footage of meditating monks is accompanied only by location sounds: chanting, breathing, mountain winds, bird calls. If it sounds slow, that’s because it is. But the result is a truly penetrating portrait into an ancient culture. Highlights include the opening sequence in which dozens of monks, serene-looking creatures in fiery red and orange robes, literally bounce around the airy monastery, yelling and laughing their way through philosophical debates. Further along, we see blessings by the Dalai Lama, endearingly sweet in his younger days with a mischievous grin and Buddy Holly glasses. One of the most powerful sequences focuses on the burning body of a cremated man. A close-up of a smoking skull leaves the viewer either peacefully contemplating the nature of the life cycle or flinching and hoping it ends soon. While the less philosophically inclined moviegoer may literally fall asleep, the film’s truly organic style portrays a total absence of pretension that rolls in like a fresh wind on a playing field strewn with the pomp and circumstance of certain invasive documentary “personalities.” And when a booming chant brings forth the subtitle “May all beings attain union with the perfect happiness,” you can’t help but calmly reply with an internal “amen,” no matter how deep your spiritual roots delve.