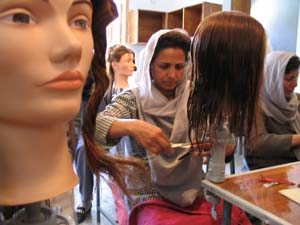 The Beauty Academy of Kabul

The questionably good news put forth in this documentary is that vanity apparently survives everything. The wars with the Pakistanis, the Russians, and the Taliban, which have proscribed Afghani life and expression for the last 30 years, may have collectively crippled all public semblance of normalcy in Afghanistan but have nevertheless failed to quash all the desires that lurk within. Who knows what beauty lurks beneath those burkas? The rule of the Taliban set the state of women’s freedoms back centuries and created a climate of fear in which a mere splash of nail polish or lipstick was grounds for a beating. In the summer of 2003, after the Taliban was wrested from totalitarian power, an international group called Beauty Without Borders sent some hairdressers and stylists to Kabul to open the film’s titular beauty school, and New York filmmaker Liz Mermin came along to document the process. As superficial as the art and science of cosmetics and hairdressing may seem, the bottom line is that these skills provide the basis for a vast number of women-owned businesses in Afghanistan – and the rest of the world. An added plus for the Afghans is that these businesses are commonly home-based as well. The film primarily focuses on the school’s first group of 20 students and the rotating crew of volunteer teachers who come to Kabul for a few weeks at a time. Some of the teachers are women who fled in the early Eighties and are now returning to their homeland for the first time. The others echo the feelings of citizens around the world who, after bearing witness to the atrocities of the Taliban, felt as though they had to do something to help rebuild the country – and especially the lives of a generation of women whose education and opportunities had been stunted by the harsh regime. The Afghan women proved anxious for the classes, although we’re left to wonder about what kind of disconnect must be happening when a teacher brags that all the scissors were donated by Frederik Fekkai or insists on a two-minute silent meditation daily as the personal solution to turmoil. Still, the hunger for these professionals’ beauty secrets is palpable. We learn that under the Taliban, Afghan women were still getting their hair done for the frequent family gatherings for weddings and other rituals and that wives of the Taliban hierarchy were often the most frequent visitors to the surreptitious beauty salons. The film doesn’t much explore the difference between opinions of beauty in the East and the West, although the teachers are relatively mindful of not imposing their tastes. Still, the gaps between the two groups of women become evident in the way a teacher can’t understand why a student won’t disobey her husband’s dictate that she not wear make-up or in the way an Afghan woman struggles to understand why one of the teachers has never been married. Mermin’s cameras remain observant, although they rarely question what they see. Perhaps she assumes the situation is stark enough to speak for itself. However, some guiding insight would be welcome and would hoist this documentary into a more universal realm. Nevertheless, her film inspires. It’s a demonstration of the ancient proverb: Give a man a fish and you have fed him for today, but teach a man to fish and you have fed him for a lifetime. The only difference here is that cans of hairspray have been substituted for fishing rods. (See austinchronicle.com/issues/dispatch/2004-10-29/screens_feature.html for an interview with Liz Mermin, who appeared in Austin with the film as part of the Texas Documentary Tour.) 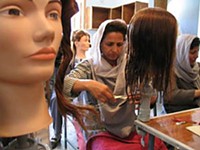