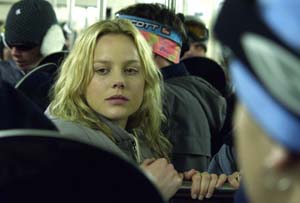 The trappings of this 2004 Aussie import trip dangerously close to a post-Coppola (that’s Sofia) indie darlingness. Consider: credits in a girlish cursive, a soundtrack of xylophones and handbells, a blue-hued ethereal palette, and a 16-year-old protagonist pasting unicorns in her journal. She is Heidi (Cornish), and in the film’s first minutes, she has frenched her mom’s trailer-park boyfriend, gotten caught, and run away to a ski resort town. She knows a man from there – or rather, she met a man from there once, and taken with her unmooring, almost-albino beauty, he gave her a parka and probably tried to take advantage of her. This is how Heidi operates (but with none of the self-possession or forward thrust that word suggests); she seems aware of her sexual magnetism, but not yet sure of how to harness it. Heidi is mostly guileless, not especially clever, frequently infuriating, and entirely captivating. Cornish, in her first film seen stateside, is astonishing – to watch her is to feel the same kind of “who is this creature?” agog as with Samantha Morton in her first film roles. She’s mesmerizing in ways that are unspoken (and maybe unscripted): in the way she smoothes down her middle part, or eyes the world like a wild child still trying to get the hang of how civilized people work. Part of that education comes in negotiating a new relationship with a rancher’s son named Joe (Worthington), a gruff sort with a chip on his shoulder. By film’s end, that chip has metastasized to boulderlike dimensions, but without much dissection or illumination on the part of writer/director Shortland. She knows where to put the camera to intimate, but never invasive, effect, and her film works best in its quietest, most watchful scenes of connection between Heidi and Joe. They’re conflict-free and yet the most exciting of the film – in which, as a viewer, I became aware of the infinite number of rabbit holes a life and a love, as rendered on film, can fall into, the gajillion trajectories a single story can take. In the end, Shortland doesn’t pick a particularly interesting one; for all its arthouse ethos, this is a pretty little portion from the “runaway with daddy issues” boilerplate. But it is pretty, and it stays just left of the dial of darlingness, and Cornish’s is the most goddamn, gosh-wow debut I’ve seen in years. Lore
A German girl at the end of World War II leads her four siblings to safety while also confronting a world more complex than her Nazi upbringing equipped her for.