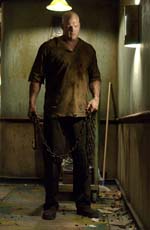 Unlike former porn auteur Gregory Dark's seminal 1985 cumshot opus New Wave Hookers, this rote exercise in slasher-film tedium holds zero surprises and is about as arousing as Tracy Lords' singing career. New Wave Hookers, on the other hand, surprised everyone in a very federal way when it was revealed that the ever-flexible Lords was at that time a minor, a major error for the San Fernando Valley's chief celluloid export. Somehow, Dark survived that particular scuffle with decency and went on to helm a series of sequels of exponentially increasing moistness before segueing sans irony into the world of music-video direction, which ironically culminated with the Nabokovian, borderline creepy schoolgirl bump 'n' grind of Britney Spears' Hit Me Baby One More Time. (Who says there are no second acts in American life?) See No Evil is Dark's bid for mainstream acceptance, but, sadly, it's a snooze. That's marginally annoying because the parallels between spurt and splat are so prominent: Both porn and horror rely on splashy money shots coming every 15 minutes or so and traditionally scant character development. Dark, however, working from a screenplay by WWF scripter Dan Madigan, is content to bathe his film in the grotty ochre skank of Saw and Se7en, and to hell with anything remotely original or borderline interesting. The set-up is pure Friday the 13th, with a group of juvenile ne'er-do-wells who are bused to a sagging, fire-swept hotel to work off some of the their petty-crime sentences. It's not long before a hulking, albino man-mountain (Kane) begins offing them in dreary ways (fire axe, chain-with-hook), and their chaperone/guard (Vidler), who lost an arm to the maniac years before, must fight his now-deceased nemesis one more time. Jason Voorhees at least had the good sartorial sense to always appear sporting his stylish goalie's mask, but the nameless Kane character doesn't even bother with that sort of Gaultier-inspired visual élan; his idea of making a statement is to rip out the eyes of his victims and occasionally peep on them while they're in the altogether. I don't know about you but when I get the hankering for that sort of tickle-me-Hellmo voyeurism, I check into Robert Bloch's Bates Motel and let the prose do the work for me. If See No Evil is an inkling of things to, um, cum from Mr. Dark, it does not bode well at all. Far better he should, like Hitchcock did, stick to the auteurism he knows so well. Surely New Wave Hookers 5 could be fuel-injected with a dollop of the old ultraviolence to create something new and, with no small amount of luck, freakishly horrifying. And if Dark plays his hand right, he might even get Ms. Lords to warble a fitting theme song. (And if she's unavailable, I hear Missing Persons is back together.)