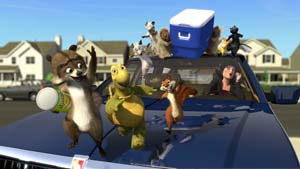 Canny casting and a sly anti-consumerist message give this splashy big-screen treatment of the eponymous comic strip (by Austinite Michael Fry and former Texan T. Lewis) extra appeal for grownups, but like a lot of animated fare, it’s overly busy, lacking the comic’s gentle, contemplative air. I’m also sad to report that what the MPAA calls “mild comic action” is a sort of Acme-Laboratories slapstick violence, and there’s a scaryass bear (voiced by Nolte) who may terrify small-fries by growling, “And don’t even think about running away because I will hunt you down and kill you.” Yet DreamWorks’ entry in the cartoon-blockbuster sweepstakes (alongside Fox’s Ice Age: The Meltdown and Pixar’s upcoming Cars) has its pleasures – if you can roll with ursine death threats and an exterminator (Church) jonesing for critter blood. Rakish raccoon R.J. (Willis) wanders into the master-planned bubble of El Rancho Camelot – “Your gateway to the good life” – in search of junk food, but he finds something more: a surrogate family of gentle wilderness creatures shepherded by Verne (Shandling), a cautious and put-upon turtle. (“I’m naturally tentative. There’s even places in my shell I’ve never been,” Shandling moans.) Verne and the gang – squirrel Hammy (Carell), skunk Stella (Sykes), possums Ozzie and Heather (Shatner and Lavigne, sadly less compelling as a father-daughter combination than you might expect), and a family of sweetly Midwestern porcupines (Levy and O’Hara) – awaken from their hibernal slumber to find their woods entirely surrounded by a massive hedge, beyond which lie acres of McMansions guarded by a hysterical homeowners’ president (Janney). Everyone needs to eat, so the animals broach the hedge and discover chips, Dr. Phil, and SUVs. (“Humans ride around in it because they’re slowly losing their ability to walk,” R.J. explains.) The film retains most of the strip’s charm when it slows down to a cute, fuzzy satire of human foibles, and the animation technology allows a wonderful funhouse view of suburban living in the expository scenes. The cast is uniformly good, but Carell steals it as Hammy, the strip’s lovable dingbat. Carell has a knack for investing cartoonish characterizations with undeniable heart, and Hammy’s addle-brained innocence is a perfect fit. Unfortunately, the script (by no fewer than four writers) is more dialogue than story, and it confuses mayhem with action, like too many family entertainments (Chicken Little, I’m looking in your direction). Three songs by Ben Folds (including a reworked version of “Rockin’ the Suburbs”) neither add to nor detract from the project, which could be the faintest praise ever. With more attention to the fundamentals of narrative, Over the Hedge wouldn’t be so over the top. (See austinchronicle.com/issues/dispatch/2006-05-19/screens_feature3.html for more on the film.) 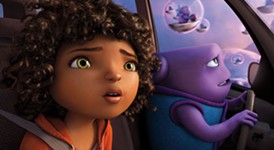 Sinbad: Legend of the Seven Seas
It’s never a good sign when the intended audience for a comedy sits stone-solid and unlaughing through the preview premiere, and when the film in ...