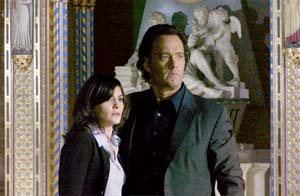 God help the moviegoer with attention deficit disorder: The Da Vinci Code comes at you like the fast and the furious and seldom lets up. Its labyrinthine narrative of religious conspiracies, Christian revisionism, and complex puzzle-clues don't make for a leisurely experience, but it's not taxing to the point of inducing a headache. While Akiva Goldman's faithful adaptation of Dan Brown's runaway bestseller and pop-culture phenomenon treats the novel as if it were a sacred text, the blur between the film and its literary source should come as no real surprise, given how reading The Da Vinci Code often felt like watching a movie. The novel's freight-train storyline and cliffhanger chapter endings had a cinematic feel to them, although those tritely executed elements were the book's weakest links compared to the seemingly unfilmable riddles and other word games Brown employed to unravel its fictional mystery about the true identity of the Holy Grail. But where the book gave the reader a sense of participation in solving that theological whodunit, the film relegates the audience to the passive role of digesting pieces of information as fast as it can spit them out. In that regard, The Da Vinci Code takes you along for the ride, but it never deigns to ask you where you’d like to go. Director Howard does a serviceable job of keeping up the film's pace (by the third act, however, the movie falters badly), and an outstanding job of visualizing the clues that provide the key to what one fanatical character (a delightful McKellen) calls the "greatest cover-up in history." (The deconstruction of Da Vinci's "The Last Supper" is so particularly well-done that it's hard to argue with its logic, if you're open-minded to that sort of thing.) Still, there's nothing transcendent about his direction or anything else in the movie, for that matter. Hanks seems oddly subdued in the role of the symbology scholar on the run from the French police after being wrongly accused of a curator’s murder in the Louvre that sets the plot in high gear. Granted, his character is just a pawn in the swirl of intrigue that envelops him, but Hanks' underplaying isn't very engaging and sometimes works against the movie. (You find yourself paying undue attention to his longish, combed-back hair, which must be the filmmakers' idea of an intellectual's haircut.) For all the brouhaha, The Da Vinci Code is really nothing but the Hardy Boys dressed up in the provocative attire of questioning (albeit, as a piece of fiction) centuries-old Christian beliefs about the divinity of Jesus Christ, the role of Mary Magdalene, and other aspects of the faith. If you take this stuff seriously, one way or another, you're sure to be duped. You've got to hand it to Mr. Brown: So dark the con of man, indeed.