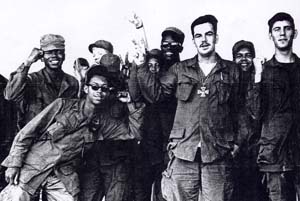 Although Hollywood, to this day, remains skittish about making movies that concentrate on America’s Vietnam war experience, our country’s popular imagery of the anti-war movement remains robust due to the peaceniks’ overall absorption into the iconography of the American counterculture of the Sixties and Seventies. Yet the story of the war’s most crucial naysayers – the soldiers in the barracks and on the front lines – remains largely unseen and untold, a situation the documentary Sir! No Sir! goes a long way toward rectifying. The film provides a window into the conversations and debates that occurred among soldiers on military bases and while in country, opinions shaped and altered by first-hand experiences and knowledge. Sir! No Sir! presents a focused history of the GI anti-war movement, beginning in the Sixties as a series of individual acts of conscience by servicemen who reached their own conclusions about America’s early involvement in Vietnam, conclusions which led to courts-martial, stockade time, and desertions. As the war and the number of conscripts grew in size, so did the number of people who opposed the mission. Sir! No Sir!, however, is not the story of the draft dodgers or resisters but rather the story of those already who were already dog-tagged and shipped out before their misgivings and resistance developed. This is the story of the pirate radio stations, the underground newspapers, the coffeehouses that emerged near the U.S. bases, and the Vietnam Veterans Against the War. Brought into particularly sharp relief is the history of the coffeehouses as alternative centers for military persons to associate and share ideas outside the confines of the base. It’s a history well-known to the filmmaker, David Zeiger, who was a civilian actively involved in running Killeen, Texas’ Oleo Strut, the era’s coffeehouse by Fort Hood (named after the shock absorbers in helicopters). The film’s generous amount of archival material about the happenings at our nearby Fort Hood makes the material especially illuminating on a local level. While a great number of former servicemen are interviewed for the film, their largely one-on-one recollections and testimonies are greatly magnified by the massive amount of archival visual footage presented here. Jane Fonda (whose son Troy Garrity narrates the documentary) is also interviewed in the present day about her involvement with the FTA tours she famously conducted with Donald Sutherland and others who toured throughout the U.S. and Vietnam as a sort of countercultural alternative to Bob Hope’s USO tours. Also terribly revealing is the information contributed by interviewee Jerry Lembcke, whose book The Spitting Image finds no actual cases of GIs being spat upon by anti-war protesters upon their return – a myth that prominently resurfaced during the recent buildup to the war in Iraq. Apart from the valuable history that Sir! No Sir! offers, the corollaries between its subject matter and the current anti-war movement in America are impossible to ignore. These days, as America’s struggle to win the hearts and minds of the world’s citizenry continues unabated, and the Army’s Fort Hood can be found just down the road from Cindy Sheehan’s Camp Casey in Crawford, the distance separating the past from the present becomes little more than a desert mirage.