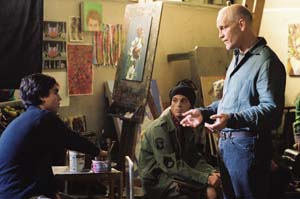 Ultimately it’s too scattershot to cohere into something really great, but this smarty-pants campus yarn is on fire with satire. Perhaps it’s in some ways an unlikely follow-up to Zwigoff and Daniel Clowes’ transcendent screen treatment of Ghost World in 2001, lodged as firmly as it is within the genre of the college farce – roommate hijinks, cafeteria slop, and wacky professors abound – but once the film settles in to its undergraduate demimonde and starts to build drama, it attains a similarly remarkable depth of atmosphere enhanced by Zwigoff’s hyper-real, expressionistic style, which is just pitch-perfect for its material. Jerome (Minghella, son of director Anthony Minghella and late of Bee Season) is a wan, virginal art nerd. Pummeled by bullies in POV, young Jerome tries but fails to score chicks with his drawings. Cut to the Strathmore Institute, whose imposing brochure-friendly façade is actually surrounded by urban blight and crime, including serial killings by the so-called Strathmore Strangler. Jerome gets two roommates: a Kevin Smith manqué (Ethan Suplee, not coincidentally a frequent Smith collaborator) who’s making a slasher film about the murders, and a closeted fashion student (Nick Swardson). He gets wacky professors: a fatuous bozo (Malkovich; you could eat him with a spoon, he’s so good) with a passel of sycophants, an apathetic sculptor (deadpan Jack Ong), and Huston, who’s kind of the film’s true north of sincerity. He gets a perfect subject in Audrey (Myles), a figure model who’s more than your average dream girl (we know this because she talks with a mouthful of sandwich), and he gets wrapped up in the Strangler intrigue. The pulp-thriller bits are the film’s weakest link, even though they provide Broadbent as a psychotic recluse; the movie doesn’t need them to broadcast its cynicism when the little moments (a fellow student’s gallery display, a nightmare Thanksgiving dinner) are so much more palpable and so much better at eviscerating the culture of artistic pretension. (“He’s trying to sing in his own voice using someone else’s vocal cords,” Malkovich says of a student’s work.) The movie works best when it isn’t so busy with its concept, and it has moments of real, heartbreaking beauty to go along with its bile – a sucker-punch combination given emotional heft by David Kitay’s restrained but grave score. Unfortunately most of these moments are concentrated in the second act. The movie takes too long to find its groove, and it doesn’t stay there; the ending is particularly unsatisfying and abrupt. When it’s on, it’s really, really on. But when it’s not, it feels like it’s struggling to find its style, just as Jerome is. Ghost World
Brilliant portrait of teen anomie is based on the underground comic book by Daniel Clowes.