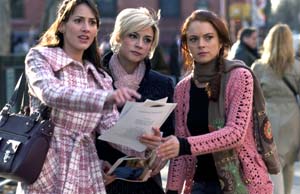 Just My Luck is the first film in which Lohan portrays a full-fledged adult. As Ashley Albright, she has a fantastically vague professional job, an enormously unrealistic New York apartment, and gorgeously dazed admirers. Enter Jake (Pine): fumbling, stumbling, can’t catch a break, but really good looking behind his dazed expression, Jake. While Ashley’s career and love life sail beyond the stratosphere, everything Jake touches explodes (literally). He poorly manages a British boy band (played by British pop sensation McFly) and begs them for more time. At a gaudy masquerade ball, Jake and Ashley cross paths, kiss and exchange lucks (don’t ask). Jake’s world is immediately turned inside out. The band gets a huge record deal. Jake suddenly has women throwing themselves at him and a fully furnished loft with a laundry room larger than most New York apartments. Meanwhile, our poor heroine goes to jail, losing her job and all of her possessions. Tracking down a thickly accented fortuneteller, she discovers her fate but cannot remember who it was she kissed at the party (isn’t that always the case!). Finally, she re-encounters our hero. Jake takes pity on Ashley, finds her a job, and makes eyes at her while imparting wisdom about life with no luck. In an astounding third-act twist, Ashley learns that it was Jake (no!) she kissed at the party and decides to take back her luck. But wait. Jake needs his good luck. His band is having their premiere concert and everything’s going wrong! What’s a lucky girl to do? I won’t ruin it for you, but ultimately, Ashley does learn that if your boyfriend needs you to save his boy band, then dang it, you better be there. Just My Luck operates under the laziness of too many romantic comedies today. With an entirely preposterous premise, rules can be rewritten or ignored depending on the requirements of the plot. While Freaky Friday, one of Lohan’s breakout films in the fantastical screwball comedy genre, produced entertaining results, Just My Luck does not measure up. There is a smile or two to be had in simply watching Lohan fall down so much, and Love is mildly entertaining as a vain record executive. But Just My Luck offers up few laughs and even fewer surprises. No doubt this film will please the pre-teen set, but they’d be so much better off staying home and renting Mean Girls. 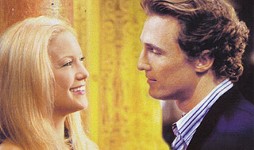 How to Lose a Guy in 10 Days
Hudson’s Andie Anderson, an NYC writer with "serious" aspirations working at a fluffy women’s magazine called Composure, is known as the "How to" girl, due ...