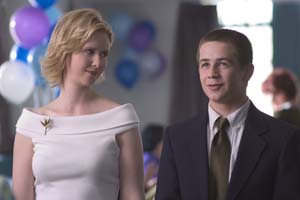 Two Eighties genre staples – Disease-of-the-Week and Poppin’ the Cherry – meet, shake hands, and mostly play nice in this sweet, if overly earnest feature. The “one last thing” that 16-year-old Dylan (Angarano) wants to do before his body succumbs to terminal cancer is go fishing with a famous ballplayer. At least, that’s what he thinks he wants, and that’s what he tells the United Wish Givers Foundation, and that’s what he plans to say during their televised news conference. But once cameras roll (and with lips gently loosed by his medicinal pot), Dylan announces a different wish – to spend a weekend with a supermodel named Nikki Sinclair (an unmemorable Mabrey). Dylan’s quite-right rationale – “What’s the point in a wish if you don’t wish for what you really want?” – doesn’t win over the scandalized United Wish Givers Foundation, but pretty much everyone else on the planet seems taken with the "Wish Kid.” Friends and strangers alike want not just to accommodate him, but to shower him with wealth and wisdom (yes, I know the kid’s dying, but still …). That sort of unreality hangs over the whole picture, from its halfassed attempts at high fashion (Nikki and her sunny good looks are more the stuff of catalog modeling) to the ease and swiftness with which Dylan and his friends launch a cable-access show (in order to raise funds for Dylan to go to New York to try to woo Nikki), a show that is seen at precisely the right moment in order for Dylan’s passed-over ballplayer to take notice, swoop in, and shower Dylan with wealth and wisdom. There’s a lack of sophistication to the storytelling (the script is by former TV writer Barry Stringfellow), and that lack creeps into the look of the film as well. Shot on HD, One Last Thing … is crisp but flat, textureless; and Steyermark’s (Prey for Rock & Roll) attempts to “art” up a couple of scenes with extreme close-ups and piecemeal framing distract to no discernible (positive) effect. Still, the thing works, more or less, despite itself. The cast mostly does good work, and as the sickly but wisecracking Dylan, Angarano (Jack’s son on Will & Grace) is the film’s anchor, a winning presence that consistently rises above the taint of schmaltz or mystical hokum. You know he won’t live – the film is admirably up-front about this inevitability – but you can’t help but cheer him on toward getting laid.