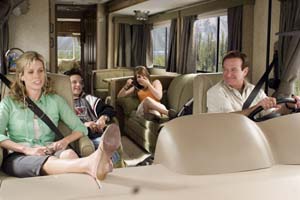 Isn't it time to put Robin Williams out to pasture? There's precious little mirth to be had via RV after the comically nasty opening setup, during which harried soda-pop exec Bob Munro (Williams) watches his children (Hutcherson, Levesque) morph from cutesy moppethood to twin titans of teenage hellishness. When wife Jamie (Hines, of Curb Your Enthusiasm) inquires, "Talk to your daughter?" a chastened Bob mutters, "Yes. I'm still bleeding," a fractious throwaway line that nevertheless has the canny sting of real-world American families. After a contrived falling out with his boss, Bob is forced to cancel his family's summer vacation in Hawaii and instead rents a spectacularly garish RV, all the better to convince the hellish brood that his sudden "family bonding road trip" idea isn't exactly what it is: a dictate from said boss to be in Boulder, Colo., to deliver a key ad presentation or be fired. Hilarity, it must be noted, preferably from afar, does not ensue, unless your idea of jaunty hijinks includes draining a vehicular septic tank on your face or, possibly, palling around with Jeff Daniels beneath purpled mountain majesties. It will likely escape no one's attention that RV is a direct crib from the marginally more entertaining and kinda-sorta transgressive series of National Lampoon's Vacation films, which, at their very least, featured Chevy Chase, a comedian whose Fletch-y, SoCal comic tone often felt – refreshingly, I mean – as though it were being beamed in from planet Quaalude. They don't make comics (or drugs, I hear) like that anymore, which is almost certainly a good thing in the long run, but sad, bad news for RV audiences. There was a time not so long ago when Williams fairly seethed with a barely shackled comic madness that seemed as though it might, at any given moment, break free and run crazily, dangerously amok like one of Forbidden Planet's all-consuming monsters from the Id. Those exciting days of swine and roses appear passed, though (thanks, Patch Adams!), and what we and Williams are left with is a less-than-faint echo of former glories. On the plus side, he could always rent himself out to the inquisitors at Gitmo as a wholly effective and nonbruising instrument of, shall we say, information extraction. Who knew torture could be so zany?