Little Red Riding Hood eats Humbert Humbert. That's playwright Brian Nelson's unspoken pitch for Hard Candy, in which an online predator and his jailbait, gamine prey parry and feint, and generally do everything possible to make us squirm and silently swear to throw our offspring's PC out the window after first setting it afire and then grinding it to bits with a suitably gargantuan road-grader. The film begins with a chat-room tease, during which adult photographer Jeff (Wilson) and 14-year-old Hayley (Page) make goo-goo icons at each other before meeting in the flesh at a local Los Angeles diner. The intellectually and (apparently) libidinously curious honor student allows this particular wolf to take her back to his place where he "does his work," but the innocent has an agenda: She's more avenging angel than lupine side dish, and, as the unspeakable revelations stack up and the housebound (literally so) tête-à-tête turns grimly conversational, it's clear that Grandma got off easy in the original yarn. Hard Candy wants to comment on the face of modern evil and, as such, there's no denying it's "ooky," to use one of its protagonist's favorite words. Creepy to a fault and shot in a cool, clinically hip, and minimalist style, this is like watching a dual nightmare unfold in real-time, one in which one vile deed is checkmated by yet another and yet another until your mind feels like its playing shuttlecock in a badminton match between John Wayne Gacy and Patty McCormack in The Bad Seed. Despite its deadly serious subject matter, or perhaps because of it, Nelson's script devolves into shrill, jittery horror-show theatrics by the third act, complete with torture, nasty home-surgery disasters, and a morally confusing tone that leaves everyone spiritually sullied. It's a vengeance fairy tale for the Internet age, replete with a monstrous MacGuffin – Hayley's teenage friend has gone missing, and she suspects this particular wolf of knowing something about the disappearance (or, you know, does she?) – and enough sociopathic doublespeak to give both Freud and the gang over at CSI a migraine of epic proportions. At its core, though, Hard Candy has an exploitation-film heart – its showy and hyperstylized dread is reminiscent of Mark Romanek's equally ooky One Hour Photo, another semirecent film that tapped into the terrors of the cultural zeitgeist. That said, director Slade gets the most visceral punch possible from these two inherently extreme, possibly insane, characters. Nineteen-year-old Page is particularly powerful in a meaty role that requires her to be both mouse and cat, while Wilson (The Alamo remake's William Travis) oozes the self-loathing, emotional pathology of the genuinely warped with hideous realism. It takes creepy, spooky, and altogether ooky to a hideous new level. 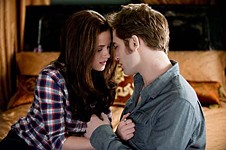 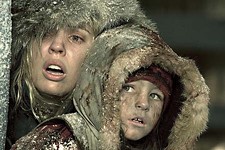 30 Days of Night
This film's high-concept stroke of genius lies not with its vampire clan but with the setting: a tiny Alaskan hamlet where nightfall indeed lasts all month.